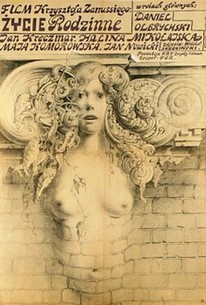 Zycie Rodzinne (Family Life, 1970), Krzysztof Zanussi's follow-up to his 1969 The Structure of Crystals, begins with an industrial designer named Wit who returns to his boyhood home at the outset of the story when confronted with the distressing news of his father's terminal illness. Wit initially feels a bit pompous and superior to his kin, who now live in a half-dilapidated home and have made their world small and narrow, with the father running a barely successful small business. Though Wit at first feels a strong conviction that he has risen above his origins, he finds himself slowly falling prey to old comforts and family values. Ultimately offered a new life with his family, with a partnership in the business, Wit is forced to confront his beliefs and convictions, and reassess his priorities.

Jerzy Binczycki
as Director of Institute

Karol Strasburger
as Husband of woman with child in window

Anna Nehrebecka
as Woman with child in window
View All

It tends to force-feed its ideas, rather than allow the audience digest them at their own pace and in their own way.

There are no featured reviews for Family Life (Zycie rodzinne) at this time.