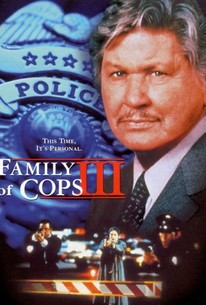 Charles Bronson stars as Paul Fein, a detective on the Milwaukee Police Force, in this thriller directed by Sheldon Larry. While investigating a double homicide involving a well-to-do banker and his wife, Detective Fein makes a shocking discovery: His hometown is being run by a gang of corrupt officials that may be involved in the burgeoning drug trade that has overtaken the Midwestern city in recent years. As Fein digs deeper into the case, he finds that his life -- as well as the lives of his family members -- are in jeopardy.

Sabrina Grdevich
as Fran
View All

There are no critic reviews yet for Family of Cops III. Keep checking Rotten Tomatoes for updates!

There are no featured reviews for Family of Cops III at this time.