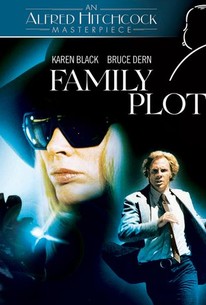 Critics Consensus: The Master of Suspense's swan song finds him aiming for pulpy thrills and hitting the target, delivering a twisty crime story with pleasurable bite.

Critics Consensus: The Master of Suspense's swan song finds him aiming for pulpy thrills and hitting the target, delivering a twisty crime story with pleasurable bite.

Critic Consensus: The Master of Suspense's swan song finds him aiming for pulpy thrills and hitting the target, delivering a twisty crime story with pleasurable bite.

Alfred Hitchcock's final film was adapted from Victor Canning's novel The Rainbird Pattern by Ernest Lehman, who previously wrote the screenplay for Hitchcock's North by Northwest. Barbara Harris plays Blanche, a phony psychic, hired by wealthy Julia Rainbird (Cathleen Nesbitt) to trace the whereabouts of her nephew, who'd been given up for adoption years earlier and who is now heir to a fortune. Blanche's cohort is "investigator" Lumley (Bruce Dern), who is fully prepared to milk the last dollar out of Julia before locating the long-lost nephew. Meanwhile, we are introduced to elegant kidnappers Adamson and Fran (William Devane and Karen Black). The fates of the two couples are inextricably intertwined by the search for the missing heir.

If this is Hitchcock's last film, he couldn't have left us on a more confident and mischievously inventive note.

Out of respect for Hitchcock's stature, and his years, Family Plot should be considered as fleetingly as possible.

Hitchcock's final picture is not one of the classics but has many of the elements that made him great.

[A] small masterpiece, one of Hitchcock's most adventurous and expressive experiments in narrative form.

A marvellously fluid light comedy with scarcely a slack moment.

A rolling boil of sex and violence beneath the bland surfaces of suburban placidity.

Family Plot proves what some of us have long suspected: namely, that deep down the "diabolical" old "master of suspense," Alfred Hitchcock, is really an irrepressible clown.

If Family Plot is not the perfectly structured film, it remains a gem from the master of wry suspense.

If this film had been made by a director other than Alfred Hitchcock, the expectations may not have been as high. Such is the price of years of success. Family Plot, while not up to those usual standards, is still crackling good cinema.

The movie is a gentle trifle, a pleasant diversion from a man who knows what he's doing every step of the way.

Family Plot is at times a pure mechanical construction, an endless game where the different actions and protagonists intertwine without gaining something. [Full Review in Spanish]

The best movie Hitchcock has made since North by Northwest.

Hitchcock's final film is an outstanding finish to a brilliant career. Hitch was obviously still sharp as a tack directing this one.

This was Hitchcock's final film, and, as far as this sort of thing goes, I suppose it could have been worse. The plot is a convoluted and sometimes confusing lighthearted mystery romp involving 'psychics', kidnapping, ransom, and, of course, the dead (or presumed to be). It's not as funny as maybe it should be, and, while I am okay with humor, I think this might have been far more effective and interesting if it was played darker and more serious. Don't get me wrong, it's interesting stuff, but I think it could have been even more so if done differently. I liked Karen Black and Bruce Dern, and, while the not as notable cast (at that time) are fine, I think this would have been better if it had some major star power behind it. The music by John Williams is pretty good, and the film has a nice look to it, but I can just tell that Hitch was probably not trying all that hard here. I know it's cliche to rant about the dip in quality of his later work, but all things considered, this could have been far, far worse. This might be lesser Hitch, but it's still kinda decent, so sure, give it a watch.

An appropriate swan song for Alfred Hitchcock's career, Family Plot is light and thoroughly entertaining. It's a clever mystery involving multiple identities and ensuing confusion with the master's comedic touches as well. Family Plot may not seem typical Hitchcock to some, but it reminds me of The Trouble with Harry as a few others. Those only familiar with Psycho and Vertigo would be surprised at his amazingly varied career. Remember how funny Hitch was on his TV show. Family Plot is cast well. I love the chemistry, especially the verbal jabbing, between Barbara Harris and Bruce Dern. William Devane is perfect as the debonair jeweler and kidnapper hiding a dangerous past. Ed Lauter's great too; he usually plays a jerk (think Longest Yard), but here he's even creepier. This film is a greatly nuanced comedy about death. It's a nice contrast with AH's previous film, the R-rated shocker Frenzy. Considered together, I think they typify his career. This isn't deep philosophy, its entertainment. As the master stated, "drama is life with the dull bits left out."

Arthur Adamson: Isn't it touching how a perfect murder has kept our friendship alive all these years.  "There's no body in the family plot." Family Plot is a pretty good going out party for the Master, Alfred Hitchcock. It's lesser Hitchcock for sure, but lesser Hitchcock is still pretty damn good. This film brings together a lot of Hitchcock's signature techniques and wraps them up nicely in two hours. Now, years after being made, Family Plot is a pretty good introduction to Hitchcock. It wouldn't be a bad movie to watch first, before diving into his several masterpieces like Psycho and Vertigo.  The movie follows a couple, one a phony psychic and the other, a taxi driver who is a pretty good little investigator. Blanche(the psychic) is asked to locate a family heir who has been missing for several years. Her and Lumley(the taxi driver) don't have to much to go by, but they soon start following up leads which lead them to another couple. These two are jewel thieves and one has a huge secret. The film brings the two couples together in a smart and intricate way. Hitchcock, like usual, doesn't try to keep major details from us. He let's us in on all the secrets and let's the suspense build from the characters mission to find out what we already know.  There's a reason he is known as the "Master of Suspense." He knows how to build it. He knew that suspense isn't built by surprises, but by knowing what's going on, but not what's going to happen. Sure, this isn't the greatest example of that in his work, but it is still a good one. He's not into huge plot twists at the end. Think how Psycho would have turned out in another director's hands. We sure wouldn't have been let in on the Norman Bates/Mother thing that early. There's one thing I have a problem with and it is a dumb ending. I didn't care for it, but it didn't ruin the movie either. Overall, Family Plot is just another solid thriller from Hitchcock. Nothing out of the ordinary there.