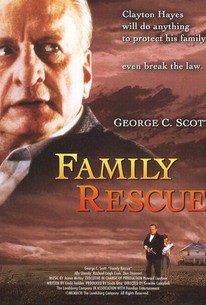 Deserted by her no-good mother Angie (Ally Sheedy), Emma Baker (Rachael Lee Cook) has been raised by her grandfather, a tough but compassionate old coal miner named Clayton Hayes (George C. Scott). Now 15 years old, Emma insists upon a reunion with her drink-sodden mom--only to be raped and impregnated by Angie's current lowlife boyfriend Ray Wilcox (Don Diamont). When Clayton goes to court in hopes of adopting Emma's sickly baby, he is thwarted by a misguided legal system that regards Wilcox as a more suitable guardian! Outraged, Clayton steals the baby and embarks upon a lengthy odyssey, with the authorities dogging his trail and a virtual battalion of truck drivers and other "little people" treating the old man as a folk hero. Produced for the CBS network, the made-for-TV Country Justice premiered January 14, 1997.

There are no critic reviews yet for Family Rescue. Keep checking Rotten Tomatoes for updates!

There are no featured reviews for Family Rescue at this time.