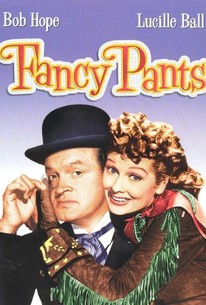 Fancy Pants is a musicalized remake of the oft-filmed Harry Leon Wilson story Ruggles of Red Gap, tailored to the talents of "Mr. Robert Hope (formerly Bob)". The basic plotline of the original, that of an English butler entering the service of a rowdy nouveau-riche family from the American West, is retained. The major difference is that main character (Bob Hope) plays a third-rate American actor who only pretends to be a British gentleman's gentleman. Social-climbing American heiress Lucille Ball hires Hope to impress her high-society English acquaintances, then takes him back to her ranch in New Mexico. Though there are many close shaves, Hope manages to convince the wild and woolly westerners that he's a genuine British Lord--even pulling the wool over the eyes of visiting celebrity Teddy Roosevelt (John Alexander). Never as droll as the 1935 Leo McCarey-directed Ruggles of Red Gap, Fancy Pants nonetheless works quite well on its own broad, slapsticky level. If the ending seems abrupt, it may be because the original finale, in which a fleeing Bob Hope and Lucille Ball were to be rescued by surprise guest star Roy Rogers, was abandoned just before the scene was shot.

Hank Bell
as Barfly
View All

Bob Hope manages to be amusing quite a bit of the time while masquerading as a member of the British nobility in the Wild West. The Paleface was funnier, but this one is pretty good.

There are no featured audience reviews yet. Click the link below to see what others say about Fancy Pants!