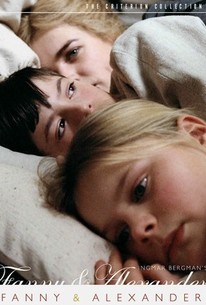 Critics Consensus: Ingmar Bergman conveys the sweep of childhood with a fastidious attention to detail and sumptuous insight into human frailty in Fanny & Alexander, a masterwork that crystalizes many of the directors' preoccupations into a familial epic.

Critics Consensus: Ingmar Bergman conveys the sweep of childhood with a fastidious attention to detail and sumptuous insight into human frailty in Fanny & Alexander, a masterwork that crystalizes many of the directors' preoccupations into a familial epic.

Critic Consensus: Ingmar Bergman conveys the sweep of childhood with a fastidious attention to detail and sumptuous insight into human frailty in Fanny & Alexander, a masterwork that crystalizes many of the directors' preoccupations into a familial epic.

In 1982, Ingmar Bergman emerged with one of his most singularly acclaimed films - a work that dramatically broke away from much of the moody psychodrama that characterized such earlier motion pictures as Cries & Whispers and Hour of the Wolf. Entitled Fanny and Alexander, and originally intended as the director's "swan song," this epic plunges into the life of a theatrical family named the Ekdahls, in turn-of-the-century Sweden. Bergman filters life through the eyes of the two titular Ekdahl children (Pernilla Alwin and Bertil Guve), as they come of age, lose their father unexpectedly, and must contend with their mother's remarriage to an uncaring, dictatorial clergyman from whom there seems to be no escape. Instantly hailed as a masterpiece, Fanny won a slew of international awards, including four Oscars. Yet curiously, the three-hour theatrical version seen in the U.S. did not represent the full depth and breadth of Bergman's vision. He also prepared a five-hour version for Swedish television, one that ran locally as a miniseries in 1984, in four separate installments. The extended running time gives the director to further develop and flesh out his characters, substories and themes, and will thus strike many fans of the original film as a remarkable discovery. ~ Nathan Southern, Rovi

Per Mattsson
as Mr. Mikael Bergman

Pernilla August
as Maj
View All

In "Fanny and Alexander," Ingmar Bergman has put the magic back into his lantern.

This premiere of the original cut, running at 312 minutes, leaves room for more than a story of one life.

Sumptuous, haunting, and unusually tender... a nakedly psychological 'in' to [Bergman's] earliest artistic impulses; nothing else in his oeuvre addresses so directly his childhood escapes into fantasy as the by-product of a harsh Lutheran upbringing.

Dickensian in its extravagant emotional power - with a hint of Charlotte Brontë - and some Chekhov in its melancholy.

An accomplished masterpiece, with excellent performances and rarely bettered direction.

I liked the performances for the most part. The children did a good job, especially later in the film when they had to deal with the difficult stepfather.

The kind of movie that declares that it's explicit intention is to contain literally everything that cinema can be, and comes rather shockingly close to making good on that.

[Fanny & Alexander] is Bergman's summing-up film; but in its mood of enchanted benevolence it represents a kind of release, as if Bergman and his demons had at last come to terms, agreed to let each other go.

The central theme of the film is artistic creation and its relation to life. [Full Review in Spanish]

It smiles at its characters' follies but cherishes their valor, and in their behalf it employs magic with the casual authority of Prospero himself.

One of the filmmaker's most personal and finely detailed works.

Ingmar Bergman crafts a stunning piece of cinema that is bold, ambitious and superbly acted and is a film that ranks among the finest of foreign cinema. The story is simple, yet the way Bergman tackles his subject is truly exquisite and adds so much to the overall enjoyment of the film. I have heard many great things about Bergman, and I can see why. He's a filmmaker who crafts picture that not only tell a great story, but they rely on a powerful, evocative visual style to really grab your attention. With Fanny and Alexander, he uses a simple idea, yet he brings it to fruition with a superb cast of talented individuals, and it's a beautiful picture that easily ranks among the finest ever made. The story follows two children and its adventures they experience with their family. What follows is a striking story that you cannot forget, and is hard to tear yourself away from because Bergman's picture is more a work of art than actual film. This is a must watch if you enjoy a finely crafted genre picture, a film that resonates with the viewer and uses a simple plot to its advantage. Of course what I appreciated the most about the film is the fact that Ingmar Bergman doesn't overdo anything with the film, and like many of cinema's finest artists, he does phenomenal work with using so little, and it works very well. Fanny and Alexander is a picture is engaging from start to finish, a film that has power in its visuals, acting and direction. If you're a cinephile you owe it to yourself to watch the film. To me, Fanny and Alexander was superb, immaculate filmmaking at its very best, and it is a film that resonates due to the fine craftsmanship that Bergman has displayed in front of the camera.

Without doubt the best movie I've seen by Ingmar Bergman so far! This amazing classic has some of the most beautiful scenery and art-directing ever conceived in the history of cinema. Superb acting all-around and an intriguing story that is incredibly moving. All in all, Swedish film-making at its best, and something you can appreciate whichever country you're from.

Finally got to see the full length five hour television version. My hands are tied. Until the judging committee agrees on a new scoring system, I am compelled to give this a perfect score - five stars.