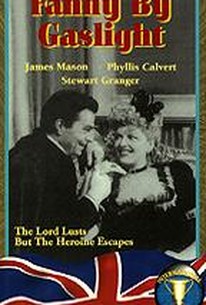 In this period drama from England, Fanny Hopwood (Phyllis Calvert), upon graduating from finishing school, returns to her family's home in London. However, bad luck awaits her at nearly every turn. After her father is killed in a fist fight by the aristocratic but dastardly Lord Manderstoke (James Mason), whose social standing saves him from prosecution, Fanny learns that he was not in fact her real father, and that she is actually the bastard daughter of a member of Parliament. Shortly after this revelation, Fanny's mother dies, and Fanny receives yet another shock when she learns that her parents supported themselves by running a brothel. Now an orphan, Fanny is sent to live with her biological father, an uncomfortable situation made even more difficult thanks to the resentment of his wife and the couple's friendship with Lord Manderstoke, who has romantic designs on young Fanny. Fanny is able to take comfort in a budding romance with Harry Somerford (Stewart Granger), her father's secretary, and a warm friendship with Chunks (Wilfred Lawson), the family butler. However, Fanny's happiness with Harry may be short-lived, as her stepmother threatens to reveal the tragedy and scandal of her past. Based on the novel by Michael Sadleir, Fanny by Gaslight was released in the U. S. under the title Man of Evil. ~ Mark Deming, Rovi

Ann Stephens
as Fanny as a Child
View All

Critic Reviews for Fanny by Gaslight (Man of Evil)

And 'ere we are again indeed, with this time the fastidious Asquith mediating the addictive pleasures of a Gainsborough period melodrama.

It's a beautiful story, and I'll not spoil it for you.

The Asquith directing is clean cut, sure and sensitively evocative of his period atmosphere -- evocative, too, of unusually fine work from practically every member of a well-chosen cast.

If it's Victorian melodrama you're after, the movie does its best to fulfil your needs.

There are no featured reviews for Fanny by Gaslight (Man of Evil) at this time.