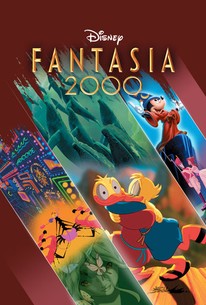 Critics Consensus: It provides an entertaining experience for adults and children alike.

Critics Consensus: It provides an entertaining experience for adults and children alike.

Critic Consensus: It provides an entertaining experience for adults and children alike.

"Fantasia/2000" brings to fruition Walt Disney's dream of creating a "concert film" with a perpetually changing repertoire. Sixty years after the release of Disney's classic 1940 experiment in sight and sound, a new generation of Disney animators and filmmakers offer an exciting showcase for today's audiences as they visually interpret classical compositions by Beethoven, Shostakovich, Respighi, Gershwin, Dukas, Saint-Saens, Elgar, and Stravinsky. This animated extravaganza features seven new selections and one returning favorite from the original classic. World renowned conductor James Levine takes up the baton and leads the Chicago Symphony Orchestra. Like its pioneering predecessor, "Fantasia/2000" embraces all the latest technological tools and innovations to tell its stories and create breathtaking imagery.

The rest of these animated sequences depend on gimmickry, cuteness, or facile ideology.

Fantasia/2000 will no doubt become a Disney perennial, but that does not by definition make it a classic.

It provides some fine artists the chance to stretch and frolic, even as it reminds today's audiences of animation's limitless borders.

This must be the most belated sequel the movies have produced.

It is a reminder that, after all these years, memories of the first Fantasia can still conjure magic in the mind.

While this update is still a masterful achievement of sound in animation, it doesn't quite match the power of the first feature.

If "Fantasia" represents the "2001: A Space Odyssey" of Disney animation, consider "Fantasia 2000" its "2010" - a workmanlike sequel that still has stunning moments but hardly approaches its forefather.

It's a clip show not a concert.

Overall, though, I didn't find it particularly satisfying

Although magnificent and filled with imagination, Fantasia 2000 doesn't hold up as being particularly ground-breaking or innovative.

Pt. 2 to the original, wherein the animators at Disney take popular classical music as a basis for visual storytelling. Like the original, some parts shine while others are simply eye-catching. Now that Pixar has shown the viability of computer animation one wishes for an update to this idea (for the idea IS sound despite being fragmented), perhaps with one story uniting different pieces of music/different parts of the story (my suggestion: La Strada); but that'd be a monumental undertaking. For the time being this'll hold us over okay.

My high school band had intimate relationships with several of the songs in this second incarnation of Disney's art and music fantasy. The slow yet strident "Pines of Rome" ended many an unconventional marching band show; the ubiquitous "Rhapsody in Blue" featured our prodigies in clarinet and piano; the bombastic and rhythm-mad "Firebird Suite" capped off my senior year concert; and "Pomp and Circumstance" (more widely known as "The Graduation Song") was played in its entirety by the junior band during commencement ceremonies. "Fantasia 2000" is indeed a full movie-going experience with beautifully animated vignettes, classic but recognizable music, and entertaining if cheap celebrity appearances (instead of the plodding prologue of its predecessor). Watching it again recently though did provoke some criticism in me: the combination of sound and visual is sometimes too on-the-nose. The story is too clear; each audio beat is visually punctuated. There is very little room for abstract interpretation.

I loved Fantasia but when I saw Fantasia 2000 on IMAX. Oh my gosh! What a great job. My favorites are The firebird suite, Rhapsody in Blue and Pines of Rome. Outstanding animation in all the three. Disney will never stop amazing you.