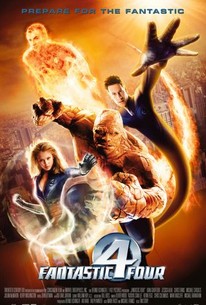 Marvel's first family of comic superheroes takes the world by storm as the longest running comic book series in history comes to the big screen. Reed Richards/Mr. Fantastic, who can elongate his body; Susan Storm/Invisible Woman, who not only can become invisible at will but can render other objects invisible; Johnny Storm/Human Torch, who can shoot fire from his finger tips and bend flame; and Ben Grimm/The Thing, a hideously misshapen monster with superhuman strength, together battle the evil Doctor Doom.

Ronnie Renner
as Himself

Barbara Christabella
as Girl in Park

Sanja Banic
as Girl in Park

Hector A. Leguillow
as Newsstand Vendor

Marvel Comics continues to empty out its stable of superheroes with this entertaining tale.

Fantastic it most certainly ain't.

The FF are unpretentious and nerdy and they bicker with each other, giving the film a loose, buoyant quality in between action sequences.

The result is hardly fantastic, but it is quite a lot of fun.

Not as bad as you remember, thanks to some spirited performances, strong casting, a couple of cool sequences, and a vibe of campy fun.

Though definitely not one of the best comic book concepts to end up on film, it still has heart and quite a bit of entertainment value.

Fox was never able to give the Fantastic Four the justice they deserve.

Fantastic Four suffers from being a film that can't decide whether it wants to cater to kids or adults, failing on both levels.

The kids will probably enjoy it, but you'll be left cold by its brash, blasé emptiness.

A strictly-for-the-kiddies, enjoy-it-in-the-moment, forget-it-when-it's-over popcorn flick. What makes it such a disappointment is that "The World's Greatest Comics Magazine" deserved better.

Not THE Fantastic Four oh no...its simply Fantastic Four here, much cooler. So this is the first major production for the Four after the now cult Roger Corman B-movie effort. Team of clever people head out into space and get hit in the face by an interstellar cloud of space stuff and obtain super powers. Naturally one of them becomes twisted and evil with his new found powers and much fighting ensues, that's it, that's all there is. Thing with this film is everything moves so fast at first. One minute the Four are discussing this space cloud, next they're discussing it with Von Doom, then they're all up in space in this space station, then they get hit by the space cloud and then just as quickly they're all back on Earth. The beginning feels so rushed so they can get to the fun stuff and silly special effects, and boy is there plenty of that. Most of this film really feels like a setup for the inevitable sequel, half the film is basically the team getting to grips with their powers and messing around. Its all a rip off if you ask me, most of the time we only get to see 'Grimm' and 'Johnny' arguing bickering and pranking each other, whilst 'Reed' tries to study their new powers. Alba as Sue Storm does literately nothing accept for flirt with Reed, regurgitate her new nudity/invisibility issue and look absolutely ridiculous with her fake blue contacts and fake blonde hair, she looks like a mutant from the X-Men. The real killer is the fact we don't actually see Doctor Doom anywhere until right at the very end! This film has no villain! its true, the first superhero flick I've seen with no actual antagonist. Then when we do finally get some Doom action its a blink and you'll miss it scenario plus it never feels like Doctor Doom, just the actor McMahon in a plastic mask (what's with the eyebrow makeup on that guy?). The sole bit of action for the most part is a highway pile up on the Brooklyn Bridge which gives the team a chance to flex their new skills in complete CGI glory. I can't really moan about the CGI because its obvious from the outset that the film was gonna be heavy on it, but this doesn't entirely excuse how bad it looks. The only character that looks reasonable is the Human Torch, Mr Fantastic looks anything but fantastic...but his CGI effects sure do look plastic. The Invisible Woman just comes across as bland and completely uninteresting whilst The Thing is so very clearly a stretchy suit. I think its hard to translate this team onto the big screen though in all fairness, they have a more childish vibe about them, their outfits are hard to update...and basically they're just dull all round. There is a very comical light-hearted feel to the film that borders on infantile at times. Now I can't say that's a bad thing because the film does adapt the comicbook atmosphere very well, what else would you expect with characters like this? But at times the film is just embarrassing to watch, there is some really cheesy ultra hammy dialog and gags, dumb visual gags...dare I say pratfall stuff and loads of quickfire quips and one liners. I mean yeah Johnny Storm is suppose to be a good looking cocky mouthy young astronaut but some of his scenes with The Thing are simply excruciating to watch. Does he really need to shout out 'flame on!' to turn into the Human Torch? The whole film looks bad and highly fake, not much better than a TV series...hell the Roger Corman movie isn't far behind really. The performances are weak, there is no bad guy and virtually 90% of the film is about nothing more than origins and tomfoolery, literately padding for the sequel in a crafty money milking operation. On one hand they do admittedly capture the spirit of the comicbook genre with this guff but on the other hand it really is a typically terrible sanitised sterile Hollywood production.

"Fantastic Four" hits the big screen in style, but sadly that is all it has going for it, as most of it's style overcomes it's substance throughout the film. It feels less of an origin story than most Marvel films, because we do not get much of a backstory and we are placed in the heat of the moment that it is all occurring. I wished that these filmmakers took a bit more time to develop their story and characters, before proceeding the plot. Anyways, the acting is okay, they all play their roles well, the action is fun, the characters are somewhat likable, and the duration is just the right length. As cheesy and lame as this film really is, I still enjoy it.

It's non-stop, fantastic and exhilarating fun from beginning to end. A spectacular and astonishing movie with a great story and great character development. Ioan Gruffoud, Jessica Alba, Michael Chiklis and Chris Evans are fantastic together. Julian McMahon is brilliant. It delivers explosive action, humor and excitement. A great cast. The chemistry between the the four actors is truly brilliant and satisfying. The best superhero movie since X-Men. Fantastic entertainment. A pure-jolting adrenaline rush. Hop on to this awesome and unforgettable ride. It focuses more on the characters and the story than the special effects. Director, Tim Story crafts an excellent and brilliant adaptation which is absolutely fun.

As far as super hero flicks go this was good stuff and fun to watch. I was surprised and Jessica Alba won me over for her hot points :)