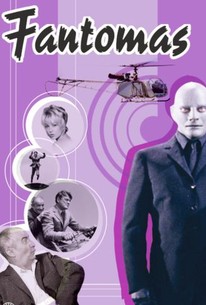 This movie is the first in a trilogy that parodied the popular silent Fantomas serials of director Louis Feuillade, which followed the adventures of the titular master criminal created by writers Pierre Souvestre and Marcel Allain. After a daring jewelry heist signed "Fantomas," police commissioner Juve (Louis de Funès) goes on national television claiming that Fantomas doesn't exist and that there is no reason for public concern. Riding the wave of public interest, journalist Fandor (Jean Marais) publishes a bogus interview with the master criminal. Fantomas (also played by Jean Marais) doesn't appreciate the joke and kidnaps Fandor to teach him a lesson. A master of disguise, he pulls an even more daring robbery wearing the Fandor mask. Comic relief is provided by commissioner Juve's awkward attempts to capture the elusive arch-criminal. ~ Yuri German, Rovi

There are no critic reviews yet for Fantômas. Keep checking Rotten Tomatoes for updates!

Louis de Funès played grumpy in most of his Movies but he was very funny.