Farce of the Penguins2007 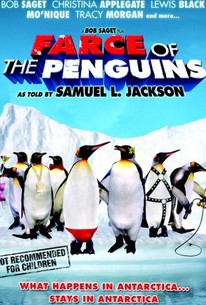 Farce of the Penguins Photos

Animal Planet aesthetics get infused with blush-inducing blue-humor sensibilities as director Bob Saget teams with an all-star cast of comics including Lewis Black, Tracy Morgan, Jason Alexander, Dane Cook, and Whoopi Goldberg to prove that sometimes penguins aren't as sweet as they appear to be on the silver screen. Film star Samuel L. Jackson narrates as actual footage of penguins going about their business in nature is backed by the kind of twisted voice-over work that could only come from the biggest names in comedy.

Jason Alexander
as Penguin on Belly

Jim Belushi
as They're All Bitches Penguin

Jon Lovitz
as My Eyes Are Up Here Penguin

Jonathan Katz
as Steve the Owl

Damon Wayans
as Hey, That's My Ass! Penguin
View All

News & Interviews for Farce of the Penguins

View All Farce of the Penguins News

Critic Reviews for Farce of the Penguins

A gimmick that might have sustained a screamingly funny 10-minute segment on a pay-cable variety show is remorselessly stretched to feature length.

The amount of filth in this movie may set your eyes and ears on fire.

It's the sort of thing a middle schooler would've thought up in between making fart noises with his armpit.

Audience Reviews for Farce of the Penguins

Too silly, Farce of the Penguins, presents a few of funny lines, but don't is a good or really entertaining movie.

Could have been HILARIOUS...but was just mildly amusing.

Gosh, this was bad. Barely watchable. It was duller than "March of the Penguins"! The jokes were trashy and not very funny. The Penguin's mouths did not move when they talked. It seemed like a quick cash-in for those who loved "March"...

Farce of the Penguins Quotes