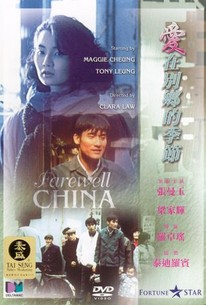 Hong Kong filmmaker Clara Law directed this sensitive drama about a young woman named Li Hung (Maggie Cheung), who is granted a student visa after considerable difficulty and travels to America to continue her education. She doesn't have an easy time of it, as she makes plain in her letters to her husband, Nansan (Tony Leung), but he tells her that she has to stay in the interests of their infant child. As her situation worsens, Li Hung asks Nansan for a divorce, but he flatly denies her request, so she cuts off all communication with him. Desperate to re-establish a connection with his wife, Nansan sneaks into the United States and arrives in New York, where he encounters a violent street gang and a friendly teenaged hooker with a heart of gold. The hooker, Jane, gets Nansan a job with her pimp while he frantically searches for Li Hung, whom he learns has managed to divorce him while he was still in Hong Kong. When they are finally reunited, Nansan realizes that his wife has become someone whom he can barely recognize. Hayley Man co-stars with Liu Chin.

There are no critic reviews yet for Farewell China. Keep checking Rotten Tomatoes for updates!

There are no featured reviews for Farewell China at this time.