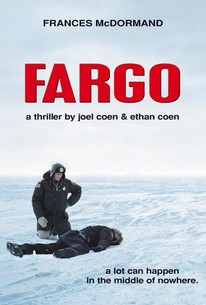 A pregnant police chief is investigating a series of homicides across the frozen tundra. Against a sprawling Minnesota landscape, a car salesman hires two criminals to kidnap his wife. But when the scheme goes sour, and wood chippers get involved, the haphazard kidnapping plot turns deadly serious.

Jose Feliciano
as Himself

Larissa Kokernot
as Hooker No. 1

Melissa Peterman
as Hooker No. 2

Wayne A. Evenson
as Customer

Robert Ozasky
as Bismarck Cop No. 1

John Bandemer
as Bismarck Cop No. 2

Its brilliance [lies] in making the forces of law and order look as interesting and funny as the bad guys.

McDormand aside, the secret might be the perfect pitch of the black comedy, the two elements in rare harmony.

The movie stands as a pseudo thesis of the things the Coen Brothers have been interested in all along...

The Coen Brothers are among the most able practitioners in America and this film is one of their best attempts to turn a familiar genre -- the True Crime drama -- into something miles away from the ordinary.

[Frances] McDormand is excellent and has a lot of fun with her tenacious and competent character, who is dedicated to duty and her sweet, supportive husband.

The performances by McDormand (bringing a great screen character to life) and Macy are superb.

...where the Coens' craft fully matured.

The Coens' dialogue is snappy and fun and they know how to ride the line between serious and funny. Their tendency towards moments of horrific violence doesn't always work for me but that is one of their signatures and I can usually get past it.

Fargo, as wonderful as it was, is a film I will never again need to revisit.

A classic story of unique quirkiness, where the characters themselves are just as memorable as the events that unfold.

Marge Gunderson: There's more to life than a little money, you know. Don'tcha know that? And here ya are, and it's a beautiful day. Well. I just don't understand it. "a homespun murder story": Fargo is one of the Coen Brothers best films. I believe I've seen this like four times now and every time I do, it leaves a bigger expression on me. Are there any better filmmakers in the world then the Coen's? This film makes me want to be able to construct a story like this. Their talent is just awe inspiring. Even the things that don't make sense the first time around, like the character Mike who advances the plot nowhere. He's there for a reason though, as is everything and when all the pieces(and there are a shit load of them) come together... chills. The film starts on a man driving in the snow with another car attached. He arrives in Fargo, North Dakota, where he is meeting two men. The man is Jerry Lundegaard and from the first moment on screen, you know exactly who he is. He has no backbone and is cowardly, but what he's seeing the two men about doesn't fit those character descriptions. He's in a big financial and soon to be legal problem, so he hires two men to kidnap his wife and extort a ransom from her rich father. Everything goes wrong for everyone and a bright, but slightly naïve North Dakota police woman is right behind them the whole way. I can't think of any aspect of the film that isn't excellent. None of it is just passable, or okay, or good. It's damn near perfect. The performances. William H. Macy is at his best as the man that can't do anything right. Frances McDormand is beyond words and very deserving of that Oscar. Steve Buscemi and Peter Stormare are hilarious. The first scene where Stormare is just sitting there, imposing his silent stare on Macy; hilarious. The writing. You can't say enough about how well this story is written. From go, the Coen's are making jokes, saying it's based on true events. The direction goes hand in foot with the writing. Joel and Ethan are on top of everything. The cinematography is beautiful with the pure white snow, and that music is so damn atmospheric and haunting. The movie is hard to put into words, but obviously it's worthy of a viewing. In fact, it should be necessary. This is filmmaking at its best.

Funny, suspenseful, and brilliantly plotted. I loved how the film was constructed, the funny accents, the would-be thugs, the somewhat dim-witted townsfolk, the strong Marge, and the nervous Jerry. Every character is excellently portrayed and the story told is strong and well conceived. A must-see.

This darkly comedic crime thriller from Joel and Ethan Coen is a real doozy, don'tcha know? Set around Minnesota and North Dakota in the winter of 1987, this film both embraces and satirizes the Minnesota upbringing of its writers/producers/directors. William H. Macy is Jerry Lundegaard- a sad sack ineffectual car salesman who is hard up for money. His wife and her dad (Jerry's boss) are both well off, but, even if they knew he needed the money, they probably wouldn't give it to him anyway, His solution is to enlist a criminal version of the odd couple (chatter box Steve Buscemi, and silent psycho Peter Stormare) to kidnap Jerry's wife, then use the ransom as payment for both them and himself. Things get complex, and especially messy when the plan doesn't go as designed, and blood becomes shed. To make things even more interesting, small town sheriff Marge Gunderson (Frances McDormand) gets thrown into the mix, and her down to Earth, smart approach really adds layers of warmth and heart, made even more poignant by the fact that she's also 7 months pregnant. There's already been so much written about this, that I really don't have anything new to contribute. It holds up to its reputation, and is a real masterpiece of writing, direction, and acting. I can't really describe it: everything just clicks, and there's a nice balance to the laughs and bloodshed. The characters and themes are interesting and thought provoking, and come on, Marge Gunderson is undeniably one of the coolest and greatest characters ever created. I'm so happy this film nabbed the Bros. Coen a writing Oscar, as well as one for McDormand's superb acting. It's a shame. Like all Coen Brothers films, the cinematography and music are brilliant, and, while complex, the film is really fairly easy to follow. It's a shame this lost Best Picture to The English Patient, because this was the film that deserved it more. Bottom line: this is a must see, and its place on all the various types of best of lists is absolutely justified. Truly a great American classic.

When I first heard of Fargo, I thought from all these reviews that it was a comedy. When I read the genre, it told me it was a crime-thriller. And before I watched it on Epix, I learned it was a dark comedy. Then I thought I was gonna hate this movie, for the film "A Serious Man" was a dark-comedy and was also directed by the Coen brothers, was a complete and utter failure to me. But I soon came to realize something during the film; this movie is amazing. It started as a comedy, in which the laughs were very dark and enjoyable, then grew into a problematic drama, which grew into a crime film, and then quickly into a thriller. All the genres that I expected were in the film, but never was my first thought about it. Fargo is a film that surprised me completely. Winning two academy awards (Best Actress and Best Original Screenplay), Fargo is an exciting adventure to watch. Based in small cities of Minnesota, Fargo is about a car salesman who tries to buy an investment on a parking lot. He needs money, so he decides to hire two thugs to kidnap his wife and ask for ransom from her father (who is extremely wealthy) so he can get the money to invest. But not all goes as planned, and murder, lying, robbery, and much more occur in the events that happen afterwards. Joel and Ethan always seem to make me happy (besides "A Serious Man"), and not many directors can do that. The Acting was very well done, and I disagree with the Academy at not giving William H. Macy a nomination for Best Lead Actor, let alone not giving him a win for Best Supporting Actor. I believe his acting was better than Francis McDormand's, although she did deserve her win. Steve Beschumi also played his part as a villain well, as he always does. The Cinematography of this film was good. But I am also upset with the Academy for not giving this film a nomination for the score, which was excellent. It was perfect for the film, and fit the scenes well. If I heard this score again, I'd know it was from Fargo. The film really revolves around the characters alot in the film, and I give much respect for the film. The different character's lives and feelings were depicted in a very different way, with scenes that just brought happiness, terror, or humor to the eyes of the character's, and the audiences. But, there were little parts in the film that I didn't like, starting with some unnecessary scenes. There were amounts of sex in the film which didn't need to be there, and some scenes that didn't make any sense. And then there was the fact that the police officer was pregnant, which brought a few laughs to the film, but no actual meaning to the plot. That's really all. All in all, this was a film that should be viewed by any happy, mature audience, and should be praised highly by any open-minded movie goer. If you still didnt't understand why i gave this film the rating it got, please visit the link below: http://www.rottentomatoes.com/user/935623/blogs/?id=703501