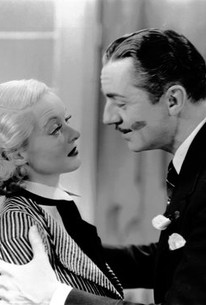 Now known simply as Fashions, the lavish Warner Bros. musical Fashions of 1934 stars the unlikely but copacetic team of William Powell and Bette Davis. It all begins when genial con artist Sherwood Nash (Powell) transfers his base of operations from New York to Paris. Sensing that the fashion "racket" is a hot commodity, Nash puts all his energies into promoting heroine Lynn (Davis) as France's foremost fashion designer. Along the way, of course, Nash and Lynn fall in love, but first the plotline must find a nice way to dispose of Nash's former partner-in-crime The Duchess (Veree Teasdale), currently posing as a White Russian Countess. Fashions is the picture in which a bevy of Busby Berkeley beauties are dressed (but just barely) as harps, prompting the apocryphal admonition from a chorus girl's mother, "Mr. Berkeley, I didn't raise my daughter to be a human harp!"

Critic Reviews for Fashions of 1934

The best of the smart-written pictures is Fashions of 1934, set in the Paris dress salons, with William Powell playing fast and tricky as an American slicker.

Audience Reviews for Fashions of 1934

Fashions of 1934, starring Bette Davis and William Powell is a good film. It is about a group of people trying to weel and deal into the next big scheme led by William Powell. They all travel to Paris and get into the fashion scene for the next big break. This film is delightful and funny.

Platinum blonde Bette is done up in the height of '34 fashion. William Powell is suave as ever.