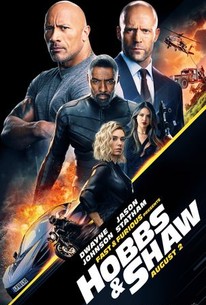 Critics Consensus: Hobbs & Shaw doesn't rev as high as the franchise's best installments, but gets decent mileage out of its well-matched stars and over-the-top action sequences.

Critics Consensus: Hobbs & Shaw doesn't rev as high as the franchise's best installments, but gets decent mileage out of its well-matched stars and over-the-top action sequences.

Critic Consensus: Hobbs & Shaw doesn't rev as high as the franchise's best installments, but gets decent mileage out of its well-matched stars and over-the-top action sequences.

Ever since hulking lawman Hobbs (Dwayne Johnson), a loyal agent of America's Diplomatic Security Service, and lawless outcast Shaw (Jason Statham), a former British military elite operative, first faced off in 2015's Furious 7, the duo have swapped smack talk and body blows as they've tried to take each other down. But when cyber-genetically enhanced anarchist Brixton (Idris Elba) gains control of an insidious bio-threat that could alter humanity forever--and bests a brilliant and fearless rogue MI6 agent (The Crown's Vanessa Kirby), who just happens to be Shaw's sister--these two sworn enemies will have to partner up to bring down the only guy who might be badder than themselves.

More times than not this film trips over its superhero tropes.

Maybe the family isn't all there. But it turns out the extended relatives throw a pretty good party, too.

Mostly, the movie just putters along on two jokes: The Rock is very, very big, and Jason Statham compared to him (and not anybody else) is small.

The action scenes are spectacular, as we have come to expect. The main car chase, also involving a helicopter, is one of the best so far.

If you're expecting Hobbs & Shaw to be anything other than a ridiculous, over-the-top action extravaganza that defies all logic and gravity, then shame on you. You should know better by now.

Whether grimly injecting herself with the virus, bantering with Hobbs or hanging onto a truck like a thrilled kid on a roundabout, Hattie is dynamite. I took a 10-year-old boy to the screening and she was his favourite character.

Hobbs and Shaw proves the series remains viable without the rest of the Family, taking an inspired detour into steroid-injected buddy cop territory while dishing up some slyly effective character development.

Hobbs & Shaw focuses on humor and one great central relationship, and winds up being one of the best films in the series because of it.

If you're up for spending 10 bucks to see good movie stars make jokes and explosions, that's what you'll get, and some of it even kind of works.

Manages to both rev its engine and spin its wheels, providing some hare-brained action and charming actors but not much else.

The overdramatic heroism of these cartoonish he-men becomes exhausting as they struggle to ooze cool.

Mike Massie
Gone With The Twins
View All Critic Reviews (343)

There are no featured reviews for Fast & Furious Presents: Hobbs & Shaw at this time.