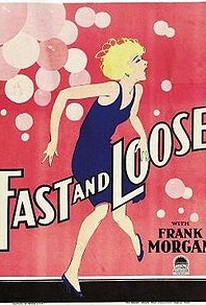 Previously filmed in 1925, Avery Hopwood's stage play The Best People was refashioned by Preston Sturges as the Miriam Hopkins vehicle Fast and Loose in 1930. Hopkins (in her film debut) and Henry Wadsworth are cast as Marion and Bertie Lenox, the footloose, prodigal offspring of wealthy, social-climbing Bronson and Carrie Lenox (Frank Morgan and Winifred Harris). The parents are shocked beyond belief when daughter Marion falls in love with low-born car mechanic Henry Morgan (Charles Starrett), while Bertie becomes enamored of down-to-earth showgirl Alice O'Neil (Carole Lombard). But mom and dad change their minds when it turns out the Henry and Alice have more common sense than either of their grown-up kids. This was the film in which Paramount contract starlet Carol Lombard changed the spelling of her first name to "Carole" -- or, rather, it was changed for her by a careless title-writer.

Critic Reviews for Fast and Loose

There are no featured reviews for Fast and Loose at this time.