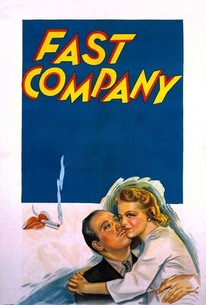 Fast Company was another attempt by MGM to match the success of its "Thin Man" films. Melvyn Douglas and Florence Rice star as Joel and Garda Sloane, the funloving rare-book dealers created by Harry Kurnitz. Try as they might, the Sloanes can't help getting involved in crime and murder. This time around, the couple searches for a con artist who has been ripping off the insurance companies by staging robberies of phony first editions. When murder rears its ugly head, Joel and Garda have four suspects to choose from, at least three of whom look incredibly guilty. Without providing any clues as to the outcome, it can be noted that the supporting cast includes such past masters of skullduggery as Louis Calhern, Douglass Dumbrille, George Zucco and Dwight Frye. Fast Company was the first of three "Joel and Garda Sloane" efforts, each one starring different actors in the leading roles. To avoid confusion with a later MGM film with the same title, Fast Company was rechristened Rare Book Murder for television.

James B. Carson
as Safe Expert

Barbara Bedford
as Secretary
View All

[Fast Company is] sprinkled with fast dialogue and hilarious situations.

There are no featured reviews for Fast Company at this time.