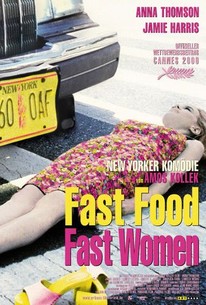 Amos Kollek directs this quiet, understated comedy about lonely hearts and empty pockets in New York. Pushing 40, Bella (Anna Thomson) works as a waitress at small downtown diner in Manhattan. Her elderly regulars include Paul (Robert Modica), a lovelorn retiree who scours the personal ads and his ill-tempered buddies Seymour (Victor Argo) and Graham (Mark Margolis), who are more than a little disparaging toward Paul's attempts at finding love. Involved in a 12-year relationship with married Broadway theater director George (Austin Pendleton), Bella craves marriage and children. On a blind date set up by her mother, Bella meets Bruno, a divorced cabbie and fledgling novelist with two young children. Meanwhile, Paul meets ready-and-willing widow Emily (Louise Lasser), while Seymour shacks up with Wanda (Valerie Geffner), a stripper with a master's degree. This film was shown in competition at the 2000 Cannes Film Festival.

Joe Darvieau
as Jasper
View All

Nothing runs very deep, or very diverting ... in this overplayed, underwritten slice of (love-)life.

Tries hard to be charming, but succeeds only occasionally.

An incoherent jumble of characters and situations.

Has a vacant, inept, why-oh-why feeling from its opening minutes and only gets worse.

Naive as Kollek's writing is, there's something winning about his sympathy with out-of-step characters.

An intimate, small-scale movie in the nicest sense and represents a wholly unanticipated advance on the part of Kollek.

Audience-insulting. Our heroine has faced no difficulty, learned nothing, earned nothing, but she has a lovely fairy-tale ending that's supposed to make us leave the theater happy.

Despite some lovely moments ... Fast Food Fast Women operates like a sitcom.

Just a vain attempt at making a movie about the perils of romance in the modern age.

There is warmth and empathy at the core of this movie that can overcome everything about it that's frustrating.

This movie's goofy charm won me over by the time it ended.

This small romantic comedy should be applauded for its pleasures.

There are no featured audience reviews yet. Click the link below to see what others say about Fast Food, Fast Women!