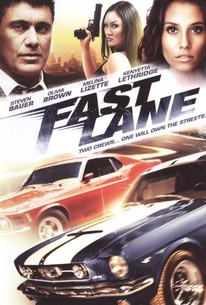 A streetwise cop infiltrates a Los Angeles car-theft ring after a high-speed accident on the freeway reveals a violent turf war between two all-girl gangs. When Lieutenant Baynes (Stephen Bauer) assigns Brandy Martinez (Melina Lizette) the task of going undercover to gather evidence against notorious chop shop owner Mama (Olivia Brown), Brandy befriends a former car thief named Eva Strong (Kenyetta Letheridge). But Brandy soon discovers that the real menace isn't Mama, but a dangerous criminal named Knight (Anthony Ray Parker). Knight owes a sizable debt to the international mob, and in order to pay them off he schemes to eliminate the competition. Fortunately for Brandy, she isn't the only undercover cop keeping shady company; Carlo (Sevier Crespo) has been out on the streets investigating Knight, and when Knight makes his ultimate play for power the two desperate cops must rely on each other in order to survive. ~ Jason Buchanan, Rovi

There are no critic reviews yet for Fast Lane. Keep checking Rotten Tomatoes for updates!

There are no featured audience reviews yet. Click the link below to see what others say about Fast Lane!