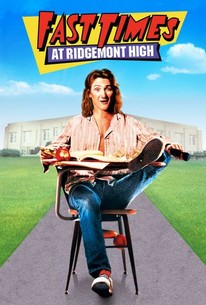 Based on 22-year-old Cameron Crowe's undercover exposé on life in a Southern California public high school, this groundbreaking effort presents alternately poignant and funny looks at episodes from the lives of some of the students as they prepare themselves for life in the outside world. Many popular stars made their debuts in the film, including Anthony Edwards, Nicolas Cage and Eric Stolz. It is also the film that made Sean Penn a star for his portrayal of the dopey passive/aggressive surfer Jeff Spicoli.

Stu Nahan
as Himself

Nancy Wilson
as Girl in Car

Lori Sutton
as Playmate
View All

What it doesn't have is a clear point of view, something that would make it of more interest than leafing through a high school yearbook.

Director Amy Heckerling has failed to provide the raunch or poignancy that would interest young moviegoers, all of whom have seen American Graffiti and its 467 imitators. Ridgemont High? A nice place to visit, but who would want to transfer there?

Fast Times will always be remembered for one thing: showing respect for and insight into the members of its core audience, something that was as rare in the 1980s as it is today.

The nice thing is that Crowe and director Amy Heckerling have provided something pleasant to observe in all of these characters though they really are sadly lacking in anything gripping.

Was never all it was cracked up to be.

Lacks the frenzied energy which allowed Porky's to beat all competitors in its field.

Here is a portrait of modern high school life that speaks lightly but truly to the fears and trials of post-Watergate teens.

...an erratic yet ultimately rewarding endeavor that deserves a place among Hollywood's very best high-school movies.

The comedy quotient just doesn't cut it - in fact, it's odd that this is always considered a comedy when it's the dramatic material that resonates more strongly.

In many ways, Fast Times at Ridgemont High defined a generation of young Americans, excited about the future and what life may hold for them.

With a hint of fantasy and a touch of romance, this small but memorable comedy proves immensely satisfying.

It's mindless, but it's well-paced.

Literally time captured in a bottle, this look at generic high school kids living their lives catches the feel of the times pretty well, and without the inclusion of without-a-clue parents to distract. In fact, the main older people are the teachers simply trying to do their jobs. The soundtrack is as good as the kids' hunger for acceptance, and the language of the script doesn't strain itself like in so many other coming-of-age masterpieces. A good bet.

It's certainly flawed, however, Sean Penn gives a bravura performance and the film has ample nostalgic charm and humor to entertain. It is, however, nowhere as near touching or deep as John Hughes' The Breakfast Club and Pretty Pink which manage to capture the essence of high school not just through classic clichés, but through atmospheric cinematography and messages that transcend the basic "growing up is tough." The film ultimately, despite being relatable, doesn't accomplish a whole lot.

LOL funny but not terribly memorable. I find young Jennifer Jason Leigh's moonface utterly forgettable (unlike her adult jagged little pill face), but she does well when she tells Damone, "No. Take that back," after he accuses her of wanting sex more than he did. My favorite character would have to be Brad, played by the Honorable Judge Reinhold. He's a doofy but supportive older brother who gets some great dad-ish lines, "Learn it. Know it. Live it."

Spicoli is great and some of the scenes are funny, yet I found it difficult to get into this film. Maybe it's because it lacks a story. Instead it studies the life of high school kids, and for that it's entertaining. It's similar to "Dazed and Confused", just a different era.