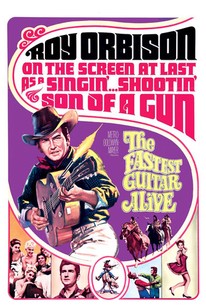 The must-be-seen-to-be-believed Fastest Guitar Alive offers singer Roy Orbison in his one and only movie starring role. Orbison plays Johnny Banner, a Confederate Spy who keeps a rifle hidden in his guitar. While on an espionage mission with partner Steve (Sammy Jackson), Johnny discovers that the war is over, and that now he and Steve are considered outlaws. Their many subsequent adventures include their involvement with dance-hall gals Flo (Maggie Pierce, co-star of the infamous TVer My Mother the Car) and Sue (Joan Freeman). Indicative of the general tone of seriousness in this film is the presence of veteran comedian Ben Lessy as a most urban-looking Indian. Though silly in the extreme, Fastest Guitar Alive is at least superficially better than most of the youth-oriented Sam Katzman productions of the period. And besides, you wouldn't want to pass up an opportunity to see Roy Orbison in his performing prime. ~ Hal Erickson, Rovi

Sam the Sham & the Pharoahs
as First Expressman

Poupee Camin
as Carmen
View All

The Fastest Guitar Alive is an old-fashioned, good-natured bad movie-to be seen at exam time, or at a drive-in, or when you just feel like seeing a movie you won't have to discuss afterward.

More 'F Troop' than 'Fort Apache,' this tale of Confederate spies, showgirls and comic Indians has achieved a certain must-see notoriety among music fans with a taste for camp because of its status as the only star vehicle ever produced for Roy Orbison.

Leaden farce with added country music, which is just as leaden.

There are no featured audience reviews yet. Click the link below to see what others say about Fastest Guitar Alive!