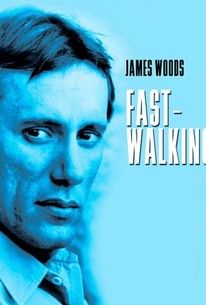 James Woods plays "Fast-Walking" Miniver, a strikingly amoral prison guard, in this dark, hard-hitting comedy/drama. When not smoking dope or scaring up customers for Evie (Susan Tyrrell), the proprietor of the local house of prostitution, Fast-Walking tries to keep order in an Oregon prison. Fast-Walking is looking for a big payday so he can quit his job and get into something less stressful, and he thinks he may have found it when William Galliot (Robert Hooks), a black political activist who has just landed behind bars, offers him $50,000 to help him escape. Fast-Walking thinks this sounds fine with him, until he finds out that his cousin Wasco (Tim McIntire) is part of a plot to kill Galliot and wants his help. Fast-Walking's dilemma is intensified by his affair with Wasco's girlfriend, Moke (Kay Lenz). Fast-Walking was written, produced, and directed by James B. Harris, who as a producer helped bring several early Stanley Kubrick films to the screen. ~ Mark Deming, Rovi

Hugh Gillin
as Heavy #2
View All

There are no critic reviews yet for Fast-Walking. Keep checking Rotten Tomatoes for updates!

There are no featured reviews for Fast-Walking at this time.