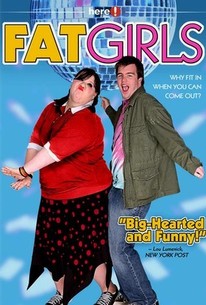 Two misfits struggle to make their way through the living hell that is high school in this independent comedy drama. Rodney (Ash Christian) lives in a small Texas town where most folks don't have much use for musical theater or much understanding of the gay lifestyle. Since the barely closeted Rodney wants little else besides a boyfriend and the leading role in a Broadway show, this doesn't make life easy for him, and he has only one close friend -- Sabrina (Ashley Fink), a smart and funny girl who happens to weigh nearly three hundred pounds. Sabrina encourages Rodney to embrace his inner "fat girl," and he finds someone who understands his dreams when he strikes up a friendship with Mr. Cox (Jonathan Caouette), the school's drama coach, who also does a mean Liza Minnelli impersonation in his spare time. Written and directed by leading man Ash Christian when he was only 20 years old, Fat Girls was screened in competition at the 2006 Tribeca Film Festival.

Juli Erickson
as Grandma
View All

Too crudely executed to make much of an impact.

Ends up stranded between two concepts.

Big-hearted and often quite funny if crudely made, Fat Girls cleverly subverts the clichés of high school comedies to serve an autobiographical story.

A modestly impressive debut -- especially considering that writer/director Ash Christian was 21 when he made it -- this poignant comedy will appeal to anyone who vividly remembers what it's like to be a high school outcast.

The film just keeps hammering away at the insight that conservatives are, like, totally twisted.

Fat Girls is fully in the "quirky indie" mold, populated by frumpy characters who sport slack expressions and enthuse about silly life plans.

A seductive deadpan comedy in the style of the uber-nerdy Napoleon Dynamite, by Paris, Texas wunderkind Ash Christian, still in his teens, Fat Girls will leave you smiling.

Amateurish to distraction, this modern-day satire about growing up gay in a small town has such a minimal pulse that you may well wonder if first-time writer/director/actor Ash Parish didn't burn his script before shooting began.

To call Christian's film unpolished is an understatement, since Rodney isn't a particularly engaging protagonist and Christian badly overuses his sulky voiceover.

Proof that straights have no monopoly on crass, lazy coming-of-age stories.

The jokes aren't funny, the characters aren't interesting and the budget is obviously so low you can't help but wonder how they could afford songs by Air Supply and Spandau Ballet.

This one is hard to find, I got mine from Net Flix, it wasn't the movie I was looking for but watched it anyway. Very factual with todays world, enjoyable, funny, and sad. Worth renting