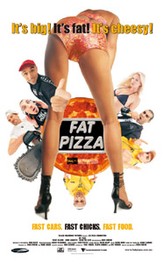 brendan n
September 15, 2017
the tv show is bad enough but this film is terrible. bad taste aside this has no story and the acting is shocking. the show may have its fans but for a movie this pushes the boundaries of bad taste and it just doesn't work

Woodsman is part of a recent trend in movies to sympathise with a character that is generally hated by society. Downfall characterised Hitler as more than just a monstrous caricature while Monster and United States of Leland centred around murderers, whom you sympathsise with. You have to give Kevin Bacon much credit for taking on a role that could've potentially have been career suicide, after all, how do you make a character who is a child molestor human? This film is unique in that its the only film I can think of that portrays a pedophile as a person, rather than as a monster. The movie treads on thin ice throughout its length, alternating between moments of disgust and pathos, but overall it feels like an honest look at the struggles of a man with the most unnatural of desires. The ending seems a little abrupt though.

I've watched about half of this film before and never bothered to finish it, not because it wasn't good, but because I was busy at the time. At the time I had only seen the parts just before it gets really depressing, so I had no real idea how heartbreaking it would get later on. While the film is not an accurate portrayal of exactly what happened during the holocaust, and to its credit it never uses the title of "Based on a true story", its a brilliant allegory about perserverence, hope and optimism. The protagonist, Roberto's, optimism shines from the beginning to end, whether he be in a cosy Italian town or a drab concentration camp, and its infectious. ****SPOILER**** His death at the end is so shattering and blunt that it could make a grown man cry. ****END SPOILER**** All in all, I haven't felt this uplifted by a film since The Shawshank Redemption.

In the tradition of Wog Boy, we get another crappy Aussie ethnic comedy. Fat Pizza is basically two or three jokes repeated ad nausem and plays like an extended episode. Just because you're being politically incorrect and deliberately trying to offend as many people as possible, doesn't mean you're making something humourous. I'm all for politically incorrect humour, in fact I follow the motto that "as long as its funny, its not racist," the trouble is there is no point or message to this humour, its politically incorrect for the sake of being so, and to make it worse its not even funny. No wonder the Australian film industry is in shambles.

Jenny T
February 12, 2013
Well its taken me 9 years but now that im a bona fide Swift & Shift Couriers addict im revisiting my, and their, Fat Pizza roots. Hilarious, over the top and fully sick. How can anybody not love em? Uber-Australian comedy references throughout however so for those of you living outside our island it may be more bemusement than amusement.

Reine J
April 13, 2012
Perfect mix of sketches mostly taken from the tv-series with the same name from Australia. It holds together good and all characters are hilarious. But you wont like it if you take your comedy too serious. This looooooooow from time to time, but in a good way :) I have been watching the series after i saw the movie, and the movie is more polished and selective. The series have too much filler and i actually prefer the movie, and its really all you need. Perfect movie warming up for a night of party with the gang. I could go on about the actaul content of the movie, but you really have to see it to believe it.

Roger R
June 12, 2011
Fully sick dude. If you want to understand the reality of multiculturalism in Australia, find out about ethnic stereotypes and know something about how things actually are whilst pissing yourself laughing watch this and the entire TV series - should be mandatory viewing for anyone wishing to immigrate here - back to back with "Wake in Fright"

W.A B
December 1, 2010
A very clever bonkers film with at time some unneded Sick humor but other then that it's a laugh riot

Australian director Paul Fenech leaves virtually no topic of Australian interest unsatirized in his scatologically-laden 2003 gross-out comedy, Fat Pizza. Pizza delivery guys Pauly (Fenech), Sleek (Paul Nakad), and Davo (Jabba) all go about their daily business while getting caught up in a series of misadventures. Pauly manages to get into fights with a rival fast food outlet's mascot while incurring the wrath of a gang of midgets miffed about his usage of a handicapped stall in a restroom. Sleek is a Lebanese rapper who simultaneously hides from the various women he's slighted and from racist cops who are just interested in roughing him up for being Middle Eastern. New delivery man Davo's mission is much simpler: he's a druggie in search of a new high. Meanwhile, their violent boss Bobo Gigliotti (Johnny Boxer) attempts to divert the brow-beating he regularly gets from his mother due to his being a middle-aged virgin and signs up for a mail-order bride from Vietnam. Based on an Australian television series of the same name, Fat Pizza premiered in Australia in 2003 with decidedly mixed reviews.

Gavin S
½ March 19, 2010
Great Australian movie that takes ethnic stereotyping to the next level. So many crude jokes, taking the piss out of everyone. It was like a long fat pizza of old episode.

TheScarlatescu R
March 14, 2010
a friend of mine recommended it, dissapointing

Steven Y
March 27, 2009
There's a plot of sorts about a guy who works at a pizza shop holding a ring for his boss who bought a mail-order bride or something. The plot is just an excuse to string some skits together. Some hilarious, some funny, some awful (the Ronald McDonalds, the baby),. Offending pretty much everyone along the way. VERY un-P.C. which is a good thing. This is based on a TV show I guess (I don't know, I'm not an Aussie, I've never even been in prison). Sure it's juvenile, sophomoric, and obsessed with ass humor, but I'd rather with this than any Ali G. However,it could also have been cut by a good 10 or so minutes and would have been better.
Page 1 of 7