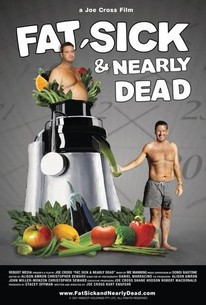 Overweight Australian filmmaker Joe Cross attempts to wrestle back control of his failing health during a cross-country trek in which he engages everyday Americans in discussions about food and obesity in this lighthearted documentary addressing a deadly serious subject. Clocking in at 310 pounds and pumped full of steroids to battle a debilitating autoimmune disorder, Cross realized that he would soon be dead if he didn't make some major lifestyle changes. But pharmaceuticals were only treating his symptoms, and no doctor seemed capable of providing the long-term care and support it would take to turn his life around. Desperate, Cross loads up his car with a juicer and a generator, and pledges to survive on nothing but fresh fruit and vegetable juice for 60 days. Not long after his journey begins, Cross quickly realizes that he's well on his way to ending his growing dependence on prescription drugs. His body has begun to heal itself, and as the process continues, Cross attempts to prove just how empowering it can be to take responsibility for our own health.

Continues the bizarre tradition of documenting how superhero-like white foreigners with commanding accents come to America to revolutionize the way we eat.

For all its aesthetic deficiencies and self-promotional aspects, it at least provides a valuable and important message.

"Fat, Sick" may be no great shakes as a movie, but as an ad for Mr. Cross's wellness program its now-healthy heart is in the right place.

A gonzo, if somewhat gimmicky, approach to advocating healthy living; it's like Super Size Me in reverse.

Virtually every documentary cliché from the past decade finds its way into this account of director Joe Cross's weight-loss odyssey, a retread-reversal of Super Size Me right down to the cheesy animation.

Phil's journey to health, with the help of Cross, transforms a lacking showpiece into a powerful tale of will and mentorship.

the heart warming clarion call for self-improvement that forms the core of Fat, Sick and Nearly Dead - which turns out to be one of the most inspiring documentaries about healthy living ever made - comes as something of a surprise.

[Cross] tells us of his self-redemption and his explanation of the principles is mostly entertaining, though eventually repetitious. The case histories he presents are effective and even sometimes moving.

The first half is a sycophantic and unfocused look at the health benefits of liquidated fruits and veggies, but Fat's latter half blossoms into something unexpected and heartrending, making it a passable recommendation.

This Oprah-ready doc about the beneficial effects of good dieting manages to be educational and watchable without making you feel too bad about that Twix bar in your mouth.

Christian Toto
What Would Toto Watch?
View All Critic Reviews (13)

Not informative, not entertaining, and not even in good taste. This "documentary" is nothing but self-promotion, self-aggrandizement and cynically commercial without offering any insight beyond "Americans eat poorly". However, if you enjoy chatting with people on a diet about how much fatter you are than them, or if you relish the awkwardness of seeing someone on a diet tell a man sitting next to his son at a greasy spoon diner that he'd rather be on a juice diet than die and abandon his children, then you might like this insufferable film. On the other hand, if you want to learn something other than how highly the filmmaker thinks of his own weight loss accomplishments, I would find almost anything else to watch.

No matter what I can at least say with certainty that this documentary has changed the way I view health and juice fasts. Getting that out of the way, I have a couple of problems with this film. For one, the director of the film has never directed anything else in his life, and he is in fact a highly paid executive. That doesn't take away from his sincerity or the film's actual usefulness as a means to educate. My main problem, I would have to say, is Cross' ignorance and the fact that he doesn't understand what the audience wants to see. The film includes completely stupid and cheesy animation, and a large chunk of it is about himself and his own struggle with weight. Cross isn't all too interesting, though his interviews with the American people really brought about a sense of community and showed that everyone struggles with willpower. Cross also blindly limits the means of obesity to willpower though, which is ignoring the state of the American economy and health care system in this country. It seems that he was simply trying to emulate Super Size Me's message by showing the alternative to a fast food diet. If he hadn't stumbled upon Phil Staples and got him to join his crusade for juicing, this movie would be completely flat and pointless. Phil humanizes the film, because he was a very large individual with bad eating habits and a sedentary job as a truck driver. He had a hard life and turned to food, and he was human and likable compared to Cross' blunt and unlikable presence onscreen. I would even have liked to see Phil further down the line, and let off of Cross for a bit so that could have been accomplished. It really changes the way you look at nutrition, but I'm not going out to preach this involuntary commercial for juicers anytime soon.

Inspired me to want to buy a juicer and start living off fruit and veg juice! That lasted a whole day until I thought about no coffee and no actual food! All the same, this is a movie that really inspires you to look at your diet and think about any prescription medications you may be using which are treating symptoms instead of cause. I found it quite interesting and really admired how this guy found the willpower and determination and then went on to help and inspire others.