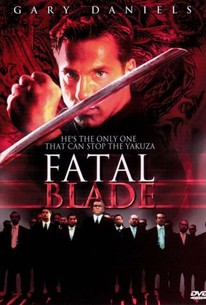 Los Angeles detective Richard Fox (Gary Daniels) sees his on-going investigation of the Japanese mafia -- the dreaded Yakuza -- take a deadly turn when a sword-wielding hitman shows up to avenge a drug deal that resulted in the deaths of several Yakuza. Despite unusual interference of his contrarian police captain (Jack McGee), Fox goes deeper into danger, only to have his partner killed, seemingly by the swordsman, known as Domoto (Kiyoshi Nakajo). Now Fox looks to avenge his partner, while Domoto needs to slay the slimy nightclub owner (Victor Rivers) responsible for the deaths of the Yakuza and his reluctant girlfriend (Seiko Matsuda).

Christopher B. Duncan
as Matt

Eddie Frias
as Dimitri
View All

There are no critic reviews yet for Fatal Blade (Gedo). Keep checking Rotten Tomatoes for updates!

There are no featured audience reviews yet. Click the link below to see what others say about Fatal Blade (Gedo)!