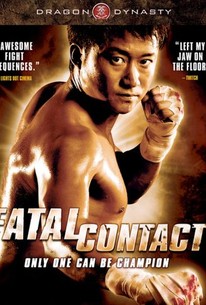 A young athlete desperate to support his girlfriend is inadvertently drawn into the dangerous world of underground fighting. As the oppressive greed and ruthless of the underground prizefighting circuit transform a once-naïve contender into a hardened fighting machine, this noble young warrior enters into a battle in which both his life, and his soul, are on the line.

There are no critic reviews yet for Fatal Contact. Keep checking Rotten Tomatoes for updates!

While Fatal Contact may not be as good as other superior Martial Art movie in terms of choreography, it delivers on story for the most part. A opera performer, who's also a former Martial Art Champion, is lured to enter an underground tournament, competing against some of the top fighters of the world. The plot for the most part satisfy me, though I did feel at times some plot-lines are unnecessary. It really doesn't get any better as it goes on, but it works for the most part as I found the twist to be interesting and liked the ending. Though my main complain about the movie it that it doesn't with one last battle, now not all Martial Art movies are supposed to end with a final battle, but I still found it disappointing. The choreography is decent and enjoyable. Out of all of the action scenes in this movie only two really wow. There're filmed well and performed well, but considering the modern setting I was expecting the environment to be used in combat and it wasn't used much. Fatal Contact is an unusual Martial Art movie that doesn't exactly does one thing better over the other. For what it was I enjoyed it, though I still think it could have been better. While you can't go wrong with this movie, it's mostly a you like it or you don't opinion with this movie.

Jacky Wu delivers in this punchfest thinly disguised as a melodrama. The fighting and action work best; the drama not so much. Fairly stereotypical characters well acted keeps this HK film interesting and moves at a decent clip. The main problem is the ending..it simply elicits behavior that is out of character with the main leads (Jacky and Miki) and brings the story to a screeching halt. Watch it for the fights though...fine choreography that will keep you engrossed.

Fantastic fight scenes and a decent story make this one a great purchase from the always great Dragon Dynasty. Plus the ending is a corker.

What you have here is a Chinese take on underground fighting. Director Dennis Law has produced some good films, but his writing, at least for this one, has room for improvement.

The first 80 minutes of this film plays out like you would expect it. Lots of fights with drama fillers in between. Wu Jing is the lead and if you have seen his other films you will know the action should be up to par. Well ... it is. It is the drama fillers that bring this film down. If it is drama that you are looking for, it is drama that you will get. Just don't expect anything entertaining. The parts in between the fights are quite boring. Most people will find themselves waiting for the next fight. The only part where the story excels is near the ending when they throw a little twist at you. Unfortunately, the twist only lasts a few seconds. Everything becomes bland after that again.

As far the action goes it is pretty spectacular. Wu Jing puts on moves at the same level as a young Jet Li or Donnie Yen. The fights really save this film from being stuck near the bottom of a hole. The only bad part about the action is that there is not enough of it at the end.

The acting is OK. Wu Jing can definitely fight better than he can act. Theresa Fu is beautiful, but her character and side story seem unnecessary, until the end. Ronald Cheng is annoying in the very beginning, but he becomes a likable character as the film progresses. Miki Yeung puts on the best performance, but her dialogue isn't that great.

While the story and ending may not be that strong, the action more than makes up for it. If you are a martial arts fan, then this is worth the watch once.