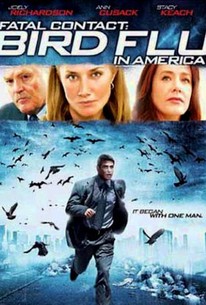 Forget about Hitchcock's Birds, because in this made-for-television disaster film an outbreak of the dreaded Avian Flu mutates to cause a worldwide pandemic that will shake the very foundations of modern society. The worst case scenario has finally become a reality. Born in Hong Kong and gradually adapting the traits which allow it to transfer from human to human, the Avian Flu causes mass panic as tens of millions of men, women, and children rapidly succumb to the its ravaging effects. As panic sweeps through the streets and entire cities are quarantined, humankind will discover that the dreaded Black Death of the 14th century was merely a minor precursor to the virus that would decimate the entire planet as it threatens the very existence of the human race.

Ferdinand Hoang
as Chinese Executive No. 1

Joseph Woo
as Chinese Executive No. 2

Frankie Fu
as Chinese Executive No. 3

More Americans get their irresponsible fear-mongering from ABC than from any other source.

There are no featured audience reviews yet. Click the link below to see what others say about Fatal Contact: Bird Flu in America!