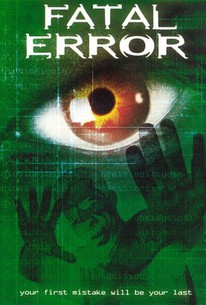 A technological nightmare becomes a terrifying reality in this sci-fi-thriller. When a group of computer experts and executives from a high-tech firm based in Seattle die suddenly and unexpectedly during a conference call, Samantha Craig (Janine Turner), a government agent who specializes in disease tracking, is brought in to investigate. Craig finds herself having to work alongside Dr. Nick Baldwin (Antonio Sabato Jr.), a local physician trying to live down a professional disgrace, and together they make a shocking discovery: a deranged genius has developed a computer virus that has evolved from destroying databases into an organic virus that can claim human lives. But who would create such a contagion, and how can it be stopped? Fatal Error also stars Robert Wagner and Malcolm Stewart.

There are no critic reviews yet for Fatal Error (Reaper). Keep checking Rotten Tomatoes for updates!

There are no featured reviews for Fatal Error (Reaper) at this time.