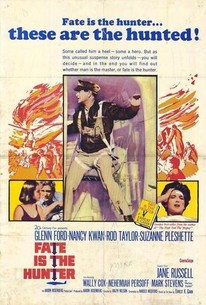 Fate Is The Hunter Photos

Suspense builds around the investigation of a plane crash that caused 53 deaths in this dramatic adaption of Ernest K. Gann's novel. Authorities systematically eliminate probable causes, finally placing blame on the pilot, who was seen drinking before the flight. The airline's director of flight operations, Sam McBane (Glenn Ford), knowing the pilot's excellent WW II record, refuses to accept the authorities' conclusions and begins his own investigation. With the help of the only survivor, a stewardess (Suzanne Pleshette), McBane re-creates the events leading to the crash in an attempt to discover the true cause. The character of the incriminated pilot, Captain Jack Savage (Rod Taylor), is revealed through a series of flashbacks, from a wartime army camp (with a cameo by Jane Russell) to the climactic moment of the thrilling crash. Milton Krasner's crisp cinematography earned him an Oscar nomination.

Jane Russell
as Herself

Pitt Herbert
as Man
View All

Critic Reviews for Fate Is The Hunter

Despite its fizzy philosophizing about believing or disbelieving in fate, this is an exciting film.

Not even the presence of Glenn Ford - fantastic as always - and Rod Taylor, the two main actors, manage to cheer up 106 minutes that could have been only half an hour. [Full Review in Spanish]

Becomes a kind of collection of moments, some listless, some sublime, in a film that actually feels startlingly contemporary.

The difficulty of the cast's job is that the series of minor situations that are important in revealing character are also very trivial and lacking in drama.

It's watchable in light of the recent mysterious disappearance of the Malaysian flight.

There are no featured reviews for Fate Is The Hunter at this time.

Fate Is The Hunter Quotes