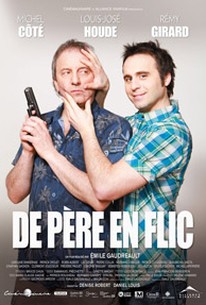 A combative father and son have to take a long look at their relationship, whether they like it or not, in this comedy from French-Canadian filmmaker Emile Gaudreault. Jacques (Michel Cote) is a burly police detective who works alongside his son Marc (Louis-Jose Houde); Marc seems skinny and geeky compared to his dad, and Jacques enjoys making cruel jokes at his son's expense, especially since Marc's girlfriend dumped him for someone more manly. Jacques and Marc have been assigned to track down the leaders of a biker gang called The Blood Machine, whose criminal activities have recently expanded into kidnapping. Jacques thinks a good way to get to the gang's kingpins is to follow their lawyer Charles (Remy Girard), and when Charles signs up for a men's retreat in the Northern forests with his troubled son Tim (Patrick Drolet), Jacques and Marc arrange to attend as well. As Charles and his son dig deep into men's movement philosophizing as they get in touch with their inner child, Jacques has to do the same with Marc, though neither seems interested in better understanding one another while waiting for Charles to drop some useful information. De Pere en Flic (aka Father and Guns) was a major commercial success in its native Canada, becoming the top-grossing French-language Canadian film on its home turf. ~ Mark Deming, Rovi

There are no critic reviews yet for Father and Guns (De père en flic). Keep checking Rotten Tomatoes for updates!

There are no featured audience reviews yet. Click the link below to see what others say about Father and Guns (De père en flic)!