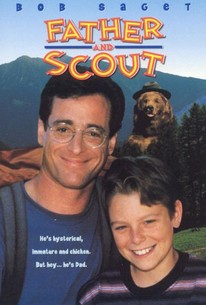 A father gets a crash-course in the outdoors in this made-for-television comedy for kids. Comedian Bob Saget stars as an urban-living dad who decides to take his son Michael (Brian Bonsall) -- working his way to Eagle Scout -- on a camping trip. Poor dad is well-meaning, but fumbles his way through a series of mishaps. Saget (Full House) served as executive producer for the film.

William Mesnick
as Father No. 1

Jonathan Emerson
as Father No. 2

Jason Azikiwe
as Father No. 3
View All

Critic Reviews for Father and Scout

There are no critic reviews yet for Father and Scout. Keep checking Rotten Tomatoes for updates!

Audience Reviews for Father and Scout

There are no featured audience reviews yet. Click the link below to see what others say about Father and Scout!