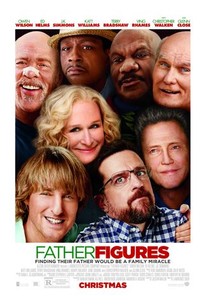 Critics Consensus: Success has many fathers, but failure is Father Figures.

Critics Consensus: Success has many fathers, but failure is Father Figures.

Critic Consensus: Success has many fathers, but failure is Father Figures.

Two brothers (Owen Wilson and Ed Helms) hit the road to find their long-lost dad after they learn that their mom has been lying to them about his death. This comedy was directed by Lawrence Sher.

Come back, Daddy's Home 2; all is forgiven!

Offensive, amateurish and should be avoided, then forgotten. Who's the Daddy? Who cares?

None of the pieces comfortably fit with any of the ones that sit alongside of them. Worse, it's just didn't make me laugh, and for a holiday comedy that just might be the most unfortunate misstep of them all.

It's not that Father Figures is irredeemably bad. It's that it's so predictable and yet so tonally disjointed.

The film, which finished shooting more than two years ago before spending endless months without a release date, is both meandering and bloated, suggesting the Frankensteinian result of brutal test screenings.

It's difficult to ascertain what's harder to take in this laugh-free comedy: the sentimental bits or the expected dashes of witless crudity.

[It's] fueled on the fumes of jokes that maybe could have passed in the early 2000s. In what's almost 2018, the blandness that it bleeds makes it as boring as it is unfunny.

One thing is for certain, in the case of Father Figures, (parental) anonymity would have been best for everyone involved.

Oh Warner Bros. R-rated comedies, you used to be my guilty pleasure, but now you're my mortal enemy.

A movie entirely without consequence, about people we don't care much for, a plot of impossible silliness, and situations that seem hauled through the grinder of exhausted mid-tempo farce.

The film is very funny at times but like Wilson's other attempt at high range comedy, The Big Year, it struggles to maintain a story and the crude humour. You look at the talented cast and you expect something much more interesting but seeing what has happened to the choices Wilson has made of recent time, you can't help but feel disappointed. The ending will some up what is wrong with the film, they attempt to make you care after all the pointless jokes, why wasn't a DNA test ever considered? The film is good for a once only but you'll forget it exists and move right along to another comedy that misses the mark. This is exactly what is wrong with comedies at this current moment and time, they lack true comedy and fail to engage the actors hired to portray the slim characters. This could have been a fun indie film but with a large budget it sinks in typical Hollywood disarray. 12/11/2018.

LAW & ORDER: SVU is used as the pivotal plot device that sets everything in motion. It's the best joke in the movie.

Another typical roadtrip movie where two brothers go searching for their long lost father. Perfectly passable for passing the time. Nothing more. You've seen it all before really.