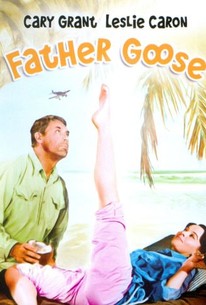 Deliberately casting his established screen image to the four winds, Cary Grant plays Walter Eckland, an unkempt, uncouth and unshaven beach bum in Father Goose. During World War II, Walter keeps busy relaying radio reports of Japanese air activity. But he's no hero, and in fact volunteered for this mission only because he's been promised a shipment of liquor by Australian naval officer Frank Houghton (Trevor Howard). Making matters worse for the misanthropic Eckland is the arrival of French schoolmistress Catherine Freneau (Leslie Caron) and her seven little-girl charges, whose plane has crashed nearby. The animosity between Walter and Catherine erupts into a slapping contest, with Walter dishing it out as well as taking it. Only when Catherine is bitten by a deadly snake does Walter express his affections for her. ~ Hal Erickson, Rovi

Ken Swofford
as Helmsman
View All

Grant cheerfully plays against a lifetime of typecasting in this modestly entertaining romantic comedy… sparks of more than one sort fly between [Grant] and [Caron].

Nobody's idea of a masterpiece, but it's Classic Cary.

A fun lightweight adventure, one of the better Cary Grant films, and a darned good "starter" romantic comedy because of all the other distractions and a world that threatens to tear this couple apart before they can even come together.

Watching Cary Grant shuffle about like an angry, disheveled bum is funny to a degree that it wouldn't be for virtually any other actor who could have conceivably fit the role.

One of Cary Grant's last pictures (he retired 2 years later) is one of his most commercially popular vehicles, with an Oscar-winning script by Peter Stone and Leslie Caron (who's half his age) as love interest.

Though Cary Grant manages to get the most he can from the role, it's not enough to cover up the film's emptiness.

Not up to Grant's stature

an immensely amusing tale, with a great Grant performance

This is one of those movies where the lone bachelor is all of a sudden having to take care of some kids, and it doesn't do much to shake things up by way of theme, either. Grant gives an okay performance, but the movie's just okay.

What a cute movie! I felt really bad for Cary Grant for like the first half though, I would have beaten those kids for stealing my stuff, but it turned out well enough! It was really funny and the whole thing flowed really well. LOVED seeing Mr. Grant all un-sophisticated!

Cary Grant sheds his debonair image and portrays a cowardly misanthrope lumbered with a french schoolteacher and her class of young girls on a desert island during WWII. The romance is charming, it's exciting when the enemy appears and there are loads of laughs. Quirky and lots of fun.