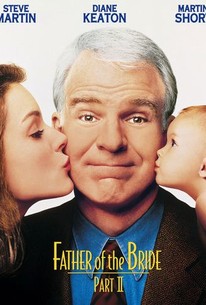 In this sequel, George Banks is going to be a grandpa, and he's not sure he likes the idea. Rather than accepting it gracefully, he immediately falls into a mid-life tailspin. However, when his wife Nina discovers that she too is pregnant, George really has his hands full.

Dulcy Rogers
as Ava, the Beautician

Kathy Anthony
as Beautician No. 2

William Akey
as Frantic Father No. 1

Jonathan Emerson
as Frantic Father No. 2

K.C. Colwell
as Father Heading off to Work

News & Interviews for Father of the Bride: Part II

View All Father of the Bride: Part II News

Critic Reviews for Father of the Bride: Part II

Martin, Keaton and cinematographer William A. Fraker put this retro fluff over better than expected early on, but hour 2 is only for those who don't want their equilibriums rattled by surprises.

Father of the Bride Part II is not a great movie and not even as good as its 1991 inspiration (not to mention the Spencer Tracy-Elizabeth Taylor original from 1950). But it is warm and fuzzy, and has some good laughs and a lot of sweetness.

I like the sequel as well as the original

Like a trained monkey, Martin Short is trotted back out for more of his mincing shtick. But perhaps the most unattractive quality of both films is the ugly obsession with material excess.

The strengths of these films are not so much laughs as sincerity and heart. [Blu-ray]

A sequel to a lousy remake? How droll.

More of a sequel for sequel's sake than a justified continuation of the story.

An exuberant sequel to complete a near-perfect translation of the 1950s era comedies to the 1990s.

Martin at his best...nearly, anyway

Audience Reviews for Father of the Bride: Part II

Double the pleasure! Double the fun! Annie and Nina are both preggers, and it's a heartwarming, if a bit saccharine, sequel.

"I enjoyed this one almost as much as I did the first film. It still has the same charm and simplicity as the first. The chemistry between all the actors is just as strong as the first film. I love Steve Martin and Diane Keaton together. It just seems to come so easily for them. Martin Short brings the laughs with his quirky character. Both the first, and second film are great family films. I never get tired of watching either. See it if you get the chance."