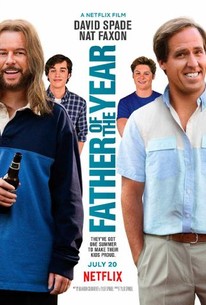 Father of the Year Videos

Father of the Year Photos

When a drunken debate between two recent college graduates about whose father would win in a fight is taken seriously by their idiot dads, jobs are lost, relationships ruined, futures destroyed, and best friends come of age as they come to grips with who their fathers really are. Starring David Spade, Nat Faxon, Joey Bragg, Matt Shively, and Bridgit Mendler.

News & Interviews for Father of the Year

View All Father of the Year News

Critic Reviews for Father of the Year

You won't hate the experience of watching it, but you'll forget you saw it before it's even over.

I suffered through this movie so you don't have to - unless you really, truly feel like wasting ninety minutes of your life.

If a bad movie arrives on streaming without a signal, does it make a sound?

Father of the Year is really a mediocre coming-of-age film trapped in an absurdist, bad comedic premise.

This film is all easy beats, predictive familiarities, and absolutely zero heart, soul, or silliness anywhere to be found.

But don't for a second imagine that this movie was good. You have way better ways to spend your time.

David Spade is still a thing?

Audience Reviews for Father of the Year

David Spade is very funny as the disgruntled dad but all the other moments feel heavily forced. The film wears out its welcome about twenty minutes from the conclusion, which is a giant cliché. The younger cast try but the material is not at a high standard so they get left out in the dark. I can't help but feel this is Sandler material, it doesn't have that Spade vibe and you could easily see Sandler slotting into the Spade role. I'm a Spade fan and he is the only likable part of this film, much like Sandler was to That's my Boy. The film has gas for the better first part but once the story leaves the focus of Spade, it tends to fall into the generic storytelling category. This film had potential and is only worthy of watching if you have a Netflix account. 28/07/2018.

Father of the Year Quotes