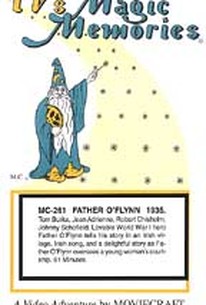 Tom Burke essays the title role in the Irish-made Father O'Flynn. Like many Hibernian films of the era, the story is allegedly based on the popular title song. Father O'Flynn's ward Macushia (Jean Adrienne) falls in love with local boy Nigel (Robert Chisholm), but her long-missing father (Denis O'Neil) reappears to gum up the works. The plot hinges on the audience's acceptance that the feisty, independent Macushia would willingly allow herself to become the virtual prisoner of her wayward father. All this is forgotten in the final scenes, when the hero settles the villain's hash with a good old donnybrook. Not surprisingly, the film is an inventory of sentimental Irish ballads, performed with verve by stars Burke and Adrienne. ~ Hal Erickson, Rovi

When the yarn sticks close to home, it reflects and irresistible charm. But when it takes a flight into melodrama, the plot goes awry.

There are no featured reviews for Father O'Flynn at this time.