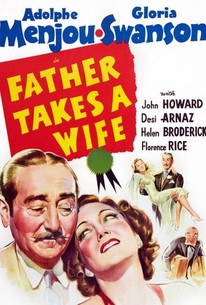 Silent screen queen Gloria Swanson returned to films after a seven-year absence in RKO Radio's Father Takes a Wife. Adolphe Menjou costars as a middle-aged widowed shipping magnate known as Senior, who falls in love with celebrated actress Leslie Collier (Gloria Swanson) and marries her after a whirlwind courtship. Now Senior must break the news to his strait-laced son Junior (John Howard), who disapproves of show people. Junior is convinced that Leslie will leave his father the moment a younger, handsomer man enters the scene-a prediction that seems to come true when the honeymooning couple make the acquaintance of South American singing hearthrob Carlos (Desi Arnaz). Meanwhile, Leslie's jealousy is aroused when she sees Senior in the company of gorgeous young Enid (Florence Rice), unaware that the girl is Senior's daughter-in-law. All misunderstandings are forgotten when it turns out that both Leslie and Enid are about to become mothers-legitimately! Though Gloria Swanson was in fine fettle, Father Takes a Wife failed to draw a crowd, posting a loss of $104,000; eight years later, Swanson staged a real comeback in the classic Sunset Boulevard. ~ Hal Erickson, Rovi

Georgie Choper
as Agnes, the Maid

Ruth Dwyer
as Nurse
View All

There are no critic reviews yet for Father Takes a Wife. Keep checking Rotten Tomatoes for updates!

There are no featured reviews for Father Takes a Wife at this time.