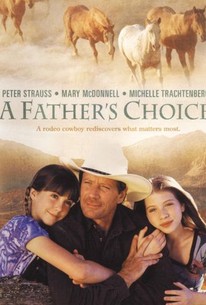 Still in their infancy when their parents were divorced, Kelly and Chris McClain (Michelle Trachtenberg) grew up in the city with her mother, while their cowboy father Charlie (Peter Strauss) remained in the wide open spaces. When their mom is murdered, the girls are court-ordered to live with their dad, and are bitterly resentful over the fact. For his part, Charlie is taken aback by Kelly and Chris' hostility, but is willing to try to mend fences between himself in his daughter. Curiously, the mystery as to who killed the girls' mother--and why--is all but forgotten as the film focuses on the emotional impact of Charlie's reunion with his long-estranged family, with special emphasis on the relationship between Charlie and oldest daughter Kelly. Filmed under the title Cowboy Dad, A Father's Choice made its CBS network bow on January 12, 2000.

Monte Timmons
as Danny
View All

Critic Reviews for A Father's Choice

There are no critic reviews yet for A Father's Choice. Keep checking Rotten Tomatoes for updates!

There are no featured reviews for A Father's Choice at this time.