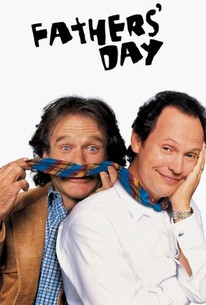 The stage is set for comedy when two middle-aged men (Billy Crystal and Robin Williams) struggle to overcome their considerable differences to find the runaway son of the ex-lover who has just informed them that one of them is the boy's father.

David Ripley
as Roadie No. 1

Ryan 'Rhino' Michaels
as Roadie No. 2

Kay Ford
as Woman in Lobby

Mary McCormack
as Lady with Broken Car (uncredited)
View All

Father's Day has a few laugh-out-loud sequences, but it's nothing to celebrate.

A movie of implacable unfunniness.

For the comic actors, this project -- an enjoyable synthesis of improvisation and adherence to the original story -- seems almost too easy. You wonder why it took them so long.

Williams and Crystal often supply, through their ad libs, what the writers may have left out.

Hey, it sounded good on paper.

Despite some laughs, there's not much of a story. But at least Williams and Crystal, old pals off the screen, seem to be enjoying themselves.

It's a wonder that these stars couldn't produce a funnier result, even with the faults of a weak script and poor pacing.

Fathers' Day scoots along pleasantly but never rises above its My Two Dads sitcom premise.

This had the potential to be hilarious, but instead falls alarmingly flat thanks to a weak and jokeless script that even the combined comedic talents of Williams and Crystal can't perk up.

The plot is full of the kind of holes necessary to set up cream-puff moments where everybody turns huggy and learns Valuable Lessons. Ugh.

Dear Billy Crystal, Robin Williams, and Ivan Reitman: WTF!!!!! Seriously! How could you mess this up so friggin badly!? SIncerely, Disappointed and Angry BAsed on a French product that I have no doubt is far better, this is the story of two men who, 17 years earlier, slept with the same woman. After all these years, her teenage son has gone missing, and she enlists the two men to help get him back. Why them? Well, one of them might be the father. She's not sure. The guy who has been the kid's father all these years may also be the father, but no one knows for sure. So what we have here is what should be a madcap comedic romp as these men try to hunt for this kid who might be their illegitimate progeny. What this actually is is a painfully unfunny, annoying, tedious, and awful f*cking mess. I think I may have legitimately been amused no more than like 3 times maximum, if that. I don't understand it either. You'd think that Williams and Crystal would be a comedy dream team, but both men just deliver their typical respective shticks, offering nothing new, or, more importantly, funny. This drags on and on with predictability out the wazoo, and I was happy when it finally ended. It's not charming, it's not interesting, and the only things keeping me from giving it a worse grade are the inclusion of Sugar Ray and a way too brief but amusing uncredited cameo from Mel Gibson. And maybe Williams's intro scene when he's on the phone. That's it. The rest of this just flat out sucks. The whole set up could be neat, but comes off as pointless and contrived. The subplot with Greenwood is pointless and rather needlessly cruel for his character and, though she's pretty, Nastassja KInski is terrible here. I'm ashamed for her, and that's not something that happens to often for me, so yeah, that says something. Bottom line: this is a pure waste of time, talent, money, and God knows what else. Not even out of curiousity do I think you should give this a look.

Not Robin Williams at his finest, although it was funny in some scenes. Not that well plotted out either.

One of those silly outrageous movies that is just funny so we don't care.

Crystal and Williams try to out mug each other in a desperately unfunny schmaltz fest.