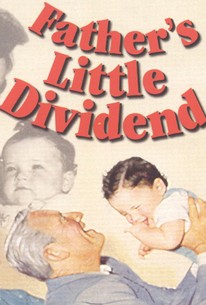 This sequel to the 1950 comedy hit Father of the Bride finds Spencer Tracy and Joan Bennett returning as Stanley and Ellie Banks, the parents of newlywed Kay Dunstan (Elizabeth Taylor). In the first film, Stanley Banks was forced to endure the chaotic events leading up to the wedding. This time, he must comes to grips with the prospect of becoming a grandfather. Once he's reconciled himself to this jolt of mortality, Stanley must contend with the little bundle of joy, who screams his head off every time Grandpa comes near him. Father's Little Dividend was remade in 1994 as Father of the Bride II, with Steve Martin assuming the Spencer Tracy role, and with the added complication of discovering that his own wife (Diane Keaton) is also pregnant. The copyright for Father's Little Dividend was not renewed in 1978; thus the film has lapsed into public domain.

Robert B. Williams
as Officer

Donald Clark
as The Dividend
View All

It is not very often that the sequel to a successful film turns out to be even half as successful or rewarding as the original picture was.

This sequel to the smash-hit Father of the Bride is inferior in every respect, but it was made quickly, cheaply and generated profit for MGM.

Spencer Tracy could hold his own acting opposite anyone, and in this excellent sequel to Father of the Bride, he proves that not even a baby can upstage him.

Unexpectedly appealing sequel, with much warm and insightful comedy about family life, pregnancy and babies.

This was a very enjoyable movie - Spencer Tracy was great once again as the father and very funny!