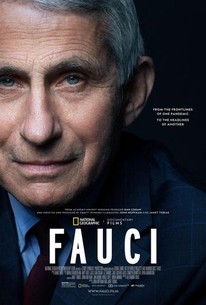 Critics Consensus: Fauci isn't the cure for the common bio-doc, but it offers an entertaining and edifying overview of a life largely spent in public service.

Critics Consensus: Fauci isn't the cure for the common bio-doc, but it offers an entertaining and edifying overview of a life largely spent in public service.

Critic Consensus: Fauci isn't the cure for the common bio-doc, but it offers an entertaining and edifying overview of a life largely spent in public service.

George W. Bush
as Self

Francis Collins
as Self

Jennifer Fauci
as Self

Thomas Frieden
as Self

Laurie Garrett
as Self

Bill Gates
as Self

Christine Grady
as Self

Apoorva Mandavilli
as Self

Staley Peter
as Self

Susan Rice
as Self
View All

If the goal was to humanize the 80-year-old talking head, filmmakers John Hoffman and Janet Tobias have succeeded.

Fauci makes no pretense about where its sentiments lie, lauding a figure whose critics have seemingly twisted his image beyond recognition in their attempts to demonize him.

Very very interesting, and Fauci comes out as an honest and fascinating character.

Fauci is a refreshing figure and a standard-bearer for the truth.

The subject comes away smelling of roses, and it seems deserved this time.

An admiring film that still ends up doing him a disservice. Fauci is smarter than Fauci.

[This] documentary on Anthony Fauci is too one-sided to be taken seriously.

This was a rather standard doc, plainly told. There was nothing especially appealing about the whole thing; Hoffman, and Tobias basically fawn all over their subject for 90 minutes.

Not quite a hagiography, but it comes close.

While Fauci has certainly put himself in a position of immense scrutiny voluntarily, it's hard not to empathize fully with the burden he carries being the scientific face of the moment we live in right now.

Mostly inessential, except for the vintage footage of Fauci's feud, and eventual truce, with AIDS activists in the 1980s.

There are no featured reviews for Fauci at this time.