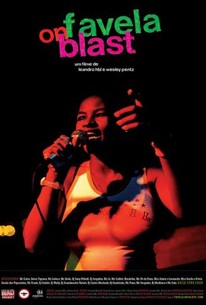 Rio de Janeiro may be one of the world's leading vacation destinations, but there's a side to the city that most tourists don't see, an underground community where young people without money or privilege have made a culture of their own. Rio's ghettos throb to the sounds of Baile funk, a hip-hop inspired style that combines the insistent electronic grooves of Miami bass, the sample-dappled sound of American rap and the sensuous rhythms of Brazilian music, while the lyrics speak of sex, violence and wild good times in a place where joy and danger walk hand in hand. American disc jockey and hip-hop producer Diplo (aka Wesley Pentz) is a serious fan of Baile funk, and he brought a camera crew to Rio to capture the raw excitement of the music and the thoughts of the people who make it and listen to it; Favela On Blast is a documentary drawn from his footage of wild live shows and one-on-one conversations with DJ's, rappers, dancers, producers and fans. Favela On Blast received its world premiere at the 2009 South by Southwest Film Festival.

Critic Reviews for Favela on Blast

There are no critic reviews yet for Favela on Blast. Keep checking Rotten Tomatoes for updates!

There are no featured reviews for Favela on Blast at this time.