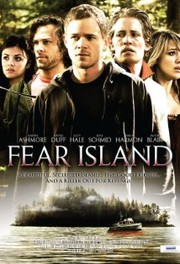 TheJimbobs123 .
May 8, 2016
Terrible acting, poor plot. Keeps skipping back and forth from past to present. Gets kind of annoying. I would say - avoid.

Beatriz P
August 26, 2015
I loved the film and creative thought

Jeff J
June 22, 2015
The story is actually pretty good. Too bad it was ruined by the worst acting of all time. The worst one being the main lead, wow... just ... just horrible. She single handedly ruined the surprise ending with her poor acting.

Don S
May 31, 2014
TV thriller/horror movie. Wasn't expecting much, but like Haylie Duff and Lucy Hale. The story is told in flashbacks, which is not a device I enjoy often. However, with the twist in this one - which I was not expecting - it couldn't be done any other way. Nothing original, very little spent on effects and yet I don't feel like I wasted my time. Fair enough movie.

Heather M
May 29, 2014
The acting in this movie was a mess, the story was weak, and the twist ending can be seen from a mile away. There is little to recommend this movie, but there are worse ones out there in the suspenseful horror genre.

Paul H
January 6, 2014
Despite this movie having a poor score, I actually thought this wasn't a bad movie. Apart from Hayley duff who plays Jenna, whose over the top acting is as thrilling to watch as watching paint dry, the other cast members carry the plot on quite nicely. The story is good and if your a fan of 'I don't know what you did last summer' this movie will keep you guessing right until the end. A nice relaxing thriller.

January 2, 2014
amazing a bit scary but great fun but also a great story behind the murderer

Sylvester E
½ December 31, 2013
It was actually not that bad. It kept you interested and it had a pretty good twist.

kathleen w
November 26, 2013
This movie was amazing! My friend and I were looking for a horror film and we got it! EXCELLENT! A+++

IMDB informs me that Fear Island is a made-for-TV film, though they neglect, as usual, to tell me on which station it initially aired. I'm going to take a stab at the Lifetime Movie Network; it's got that feel to it, and it fits with a few of cinematographer Storey's other directorial efforts (Before I Say Goodbye and We'll Meet Again, both part of "The Mary Higgins Clark" collection-though as far as I can tell Ms. Clark had not a blessed thing to do with either). But don't let that feel you into thinking I'm coming down on this monstrosity because I think it's a Lifetime Original Movie-I thought it sucked while I was watching it, days before I discovered it was a made-for-TV affair. Once again, Hillary Duff's older, somewhat less talented sister Haylie got herself a cinematic vehicle, and once again (just in case you missed it, I reviewed Backwoods, which came out the year before, a ways back, with similar results) it's terrible. And I say this as someone who doesn't have anything against the Duff clan in general; Raise Your Voice is one of those guilty-pleasure movies I can't help but watch every time I stumble across it. Fear Island has no chance of getting to that level.

Plot: the usual crop of young-and-beautifuls heads off for a weekend of partying at the island retreat of (presumably, the parents of) Tyler Campbell (A History of Violence's Kyle Schmid) and his brothers Mark (The Shrine's Aaron Ashmore) and Kyle (The Grey's Jacob Blair). Along for the ride: Mark's ex-girlfriend Jenna (Duff), who went on the promise that Mark would not be attending and isn't happy he's along for the ride, Tyler's current girlfriend Ashley (Jessica Harmon from the 2006 remake of Black Christmas), and Megan (Scream 4's Lucy Hale), a mysterious stowaway on the gang's boat who is accepted quickly by the males in the group thanks to her let's-party attitude. The first night goes off relatively without a hitch, but weird things have been happening their entire time there, and as the sun dawns on their second day, the weird factor turns dangerous. Oh, I should mention there's a frame story: As we open, Jenna is in the hospital, the lone survivor of the weekend. Detective Amory (Love Come Down's Martin Cummins) figures Jenna killed everyone else; beautiful-brilliant-stereotypical-psychologist Dr. Chalice (The Thaw's Anne Marie Deluise) believes Jenna's protestations of innocence (and amnesia). The main story is told in flashback, with punctuation scenes of the detective wanting to just shoot her and the doctor trying to get to the bottom of things...

...and you've see it all before, at least a dozen times, always done better than this. I'll give screenwriters Jeff Martel (A Fairy Tale Christmas) and Jack Harry (this is the only writing credit he has at IMDB as of this writing) two things: they have a propensity for coming up with good character names (you'll get what I mean, if you are unlucky enough to see this movie, given the demise of one of the characters) and the one piece of the plot that never quite rings true is handled with much more skill than anything else here-one assumes, in fact, that was the "what if...?" that started the script being written in the first place. Had they handled the rest of it with such care, they might have gotten somewhere-though granted they probably would have needed a casting director who would have resisted casting Haylie Duff. *

Corrie G
August 4, 2013
Its worth a watch but don't expect to be blown away

Kitty C
July 18, 2013
Well I will say I did not expect that ending at all but I feel the movie also did make it very predictable.

Mike B
April 1, 2013
A face in the crowd of hunter slasher films. Decent in a late-night bored way.

Sam E
March 24, 2013
amazing movie, was just browsing through lovefilm and this caught my eye, i loved it! far superior to most horror movies released these days It was so much fun and the twist at the end was absolutely amazing and so unexpected, Haylie Duff played her part well and was fantastic in her role given.
I would love to see more films as good as this!

Super Reviewer
Christopher H
½ March 17, 2013
Poorly acted, poorly presented, and completely telegraphed, "Fear Island" has extremely little to offer, in line with every other bottom barrel horror B-movie being squeezed out these days. Haley Duff shows zero control of her emotions and flails through the laughable direction that is thrown her way.

George S
February 21, 2013
its actually a pretty good slasher flick with a few twist to make you wonder the whole movie.
Page 1 of 5