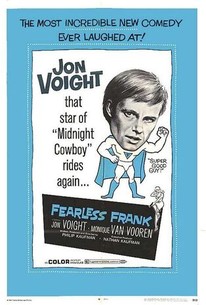 In this eccentric independent comedy filmed in Chicago, Frank (Jon Voight) is a hayseed who heads north to the big city of Chicago, only to run afoul of gangsters and wind up murdered. Frank soon finds himself resurrected as a virtuous superhero, Fearless Frank, but a mad scientist (Severn Darden) soon crafts an evil twin, False Frank, to do his sinister bidding. Monique Van Vooren plays Plethora, one of the gangster's molls, and novelist Nelson Algren appears as Needles; much of the supporting cast was drawn from the Second City comedy troupe, including David Steinberg and Ben Carruthers. Frank's Greatest Adventure was the first solo directorial credit for Philip Kaufman and the screen debut for Jon Voight, though it would not receive wide distribution until after his breakthrough role in Midnight Cowboy. ~ Mark Deming, Rovi

Ben Carruthers
as The Cat

David Steinberg
as The Rat

Ken Nordine
as The Stranger

Anthony Holland
as Alfred
View All

Technically there is nothing wrong with the movie... but, in the final analysis, the work is as juvenile as the genre it is satirizing, not cutting enough, not funny enough, not imaginative enough.

There are no featured reviews for Fearless Frank at this time.