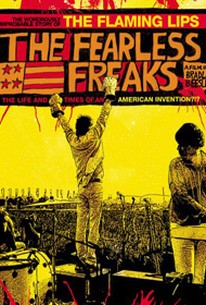 Bradley Beesley's documentary The Fearless Freaks attempts to reveal some truths about the band The Flaming Lips. The Lips have built a loyal cult following, and the film -- compiled from footage taken over 15 years -- attempts to satisfy that cult, as well as interest those unfamiliar with the band, by including a combination of performance footage and candid moments. The director was allowed full access to Wayne Coyne and the other members of the band.

Bradley Beesley
as Narrator
View All

Will please devotees without attracting many, if any, new converts.

So darn watchable that it could turn someone who never heard of the Flaming Lips into a devoted fan.

As artfully scrappy and likably wide-eyed as its subjects.

Cobbles together an appropriately whacked-out portrait of the band's surreal and haphazard career trajectory.

Having been involved in helping the band craft its decidedly bizarre visual imagery for so much of its history, Beesley's film is perfectly in sync with the Lips' unique vision.

What really fuels the movie, however -- aside from the constant, buoyant presence of the band's leader, Wayne Coyne -- is its warts-and-all approach.

Beesley could have made just a fan movie... but here we get much more.

Ripe with offbeat Americana, Beesley's rockumentary is also a portrait of growing up in a white-trash Okie ghetto.

I wish Wayne Cohn lived in my neighborhood.