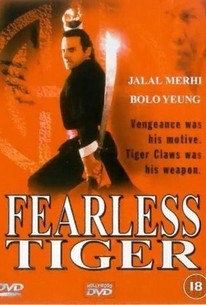 Bolo Yeung heads the rather intimidating cast of Fearless Tiger. The plot is a mixture as before: Kung-fu masters and students, betrayals, lifelong searches, revenge, final one-on-one confrontation. The film's selling cards are its dizzying action content and its variety of Far Eastern backgrounds. And, hey, there's good old Jamie Farr in a supporting role. Director Ron Hulme also wrote the script for Fearless Tiger, contributing such rapier-wit dialogue as "Ugh", "Arggh", and "Aiyee!"

K. Dock Yip
as Do Man

Glenn Kwan
as Boh
View All

There are no critic reviews yet for Fearless Tiger. Keep checking Rotten Tomatoes for updates!

There are no featured reviews for Fearless Tiger at this time.