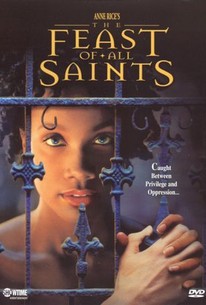 The Feast of All Saints Photos

Based on a story by Anne Rice, this made-for-cable miniseries explores the little-known phenomenon of the "Gens de Couleur Libres," or "Free People of Color," who lived in Louisiana at a time when slavery still held a stranglehold on much of the South. In 1822, it was not at all uncommon for attractive women of color to be retained as a "placage," a sort of "kept woman" who served the wishes of wealthy landowners, and after Philippe Ferronnaire (Peter Gallagher) enters into a loveless arranged marriage with Aglae (Jenny Levine) in order to curry the favor of her elderly (and very well-to-do) father Magloire Dazincourt (John Gilbert), he soon finds himself the father of two families -- one raised by Aglae, and another raised by his "placage" Cecile Ste. Marie (Gloria Reuben), a lovely bi-racial woman from Haiti. Philippe's son with Cecile, Marcel Ste. Marie (Robert Richard), is raised with the promise that, even though Philippe cannot officially acknowledge his parenthood, he will receive a first-class education in Europe, and Marcel finds himself travelling between the worlds of wealthy whites and economically disadvantaged Creoles in New Orleans. In time, Marcel falls in love with a girl of similar circumstances, Anna Bella (Bianca Lawson), but as fate would have it, her guardian, Elsie Claviere (Ruby Dee), has already arranged for the girl to enter into a "placage" with Vincent Dazincourt (Alec McClure), who happens to be Philippe's brother-in-law. Directed by Peter Medak, Feast of All Saints also features Ben Vereen and Ossie Davis.

Critic Reviews for The Feast of All Saints

Bianca Lawson is a wonderful find as Marcel's love Anna Bella, but the standout perf is that of Jennifer Beals as Dolly Rose, a prostitute who turns out to be more compassionate and maternal than Cecil.

... turns a fascinating subject -- the "free people of color" in New Orleans in the 1840s -- into a heavy-breathing costume drama...

Audience Reviews for The Feast of All Saints

There are no featured audience reviews yet. Click the link below to see what others say about The Feast of All Saints!

The Feast of All Saints Quotes