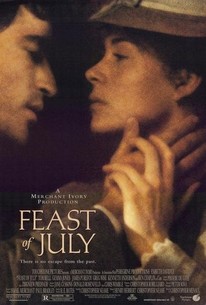 Set during the Victorian era, this British costume drama follows a young woman's attempts to cope with the aftermath of her seduction and eventual abandonment. Outcast and pregnant, the woman is taken in by a big-hearted lamplighter and his wife and finds herself pursued by the couple's three handsome sons.

Colin Prockter
as Man in Pub

Mark Bazeley
as Man in Restaurant

Critic Reviews for Feast of July

My problem with the film was that none of the characters is really interesting.

Feast of July in movie form suffers from the same weakness as the H.E. Bates novel on which it is based. To wit: For all its melodrama, sexual tension and violence, the story is a bore.

an extraordinarily difficult to follow film, full of talky, dull melodrama and the glamorization of "proper" 19th century sensibilities

There are no featured reviews for Feast of July at this time.