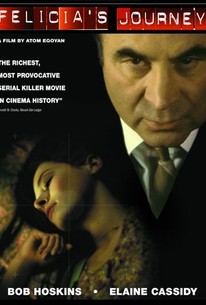 A solitary middle-aged bachelor and a naive Irish teenager transform one another's lives to arrive at a place of recognition, redemption and wisdom in Felicia's Journey, writer/director Atom Egoyan's adaptation of William Trevor's celebrated 1994 novel. Seventeen and pregnant, Felicia travels to England in search of her lover and is found instead by Joseph Ambrose Hilditch, a helpful catering manager whose kindness masks a serial killer. Hilditch has murdered several young women, but he has no conscious awareness of the crimes; like Felicia, he doesn't see his true self. Anchored by the stunning performances of Hoskins and Cassidy, Felicia's Journey is a story of innocence lost and regained: Felicia awakens to the world's dangers and duplicities; and Hilditch, who grew up lonely and unloved, comes to realize what was taken from him, and what he himself has taken.

Bob Mason
as Jimmy
View All

Likeluy divide critics and viewers, this is a simpler and less layered film than other works from Egoyan, who seems unable to infuse the pyschological thriller with his characteristic humor and irony.

You leave Felicia's Journey appreciating it. A week later, you're astounded by it.

It took awhile to sink in, but I liked Felicia's Journey very much.

Every time we think we know what's going to happen, the story spins off in a curious new direction...

[Egoyan's] still an arty hack in search of meaning.

A strange but compelling tale about trust, pain, and the miraculous power of healing.

Creepy and fascinating especially the Bob Hoskins character. He is a lonely man who is a professinal cook and a serial killer. There is also the Elaine Cassidy character who found out that she is pregnant and goes to Ireland to find her bf (who left to go find work) since he is the one responsible for getting her pregnant. Hilditch(Hoskins) and Felicia(Cassidy) meet unexpectedly and this is where Atom Egoyan goes into his fav filmmaking trademark. Exploring themes of isolated, alienated charcters dealing with loss, grief, guilt, despair and a non linear story arc. The last scene of the film felt a slight disappointing but I still felt this picture is p work from Atom Egoyan. After Egoyan's "Exotica", and "The Sweet Hereafter", "Felicia's Journey" imo is a near masterpiece.

Ah yes. My good friend Atom Egoyan. He may ignore me in the streets but this was the period of time when he was coming up with some very rewarding films. No comment about the time before or time after. Where is Elaine Cassidy after this? She was great here as was Bob Hoskins playing counter to his usual role.